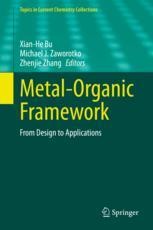 From Design to Applications

The series Topics in Current Chemistry Collections presents critical reviews from the journal Topics in Current Chemistry organized in topical volumes. The scope of coverage is all areas of chemical science including the interfaces with related disciplines such as biology, medicine and materials science. The goal of each thematic volume is to give the non-specialist reader, whether in academia or industry, a comprehensive insight into an area where new research is emerging which is of interest to a larger scientific audience.Each review within the volume critically surveys one aspect of that topic and places it within the context of the volume as a whole. The most significant developments of the last 5 to 10 years are presented using selected examples to illustrate the principles discussed. The coverage is not intended to be an exhaustive summary of the field or include large quantities of data, but should rather be conceptual, concentrating on the methodological thinking that will allow the non-specialist reader to understand the information presented. Contributions also offer an outlook on potential future developments in the field.

Dr. Xianhe Bu received his BSc and PhD degree from the Department of Chemistry, Nankai University, in 1986 and 1992, respectively. He is currently a full professor (Chang-Jiang Scholar from 2004) at Nankai University. He has been a visiting professor at the IMS (1998), Tokyo University (1999), Kyoto University (2002), CUHK (2002) and HKUST (2004). He has received several awards for his research including the Second Prize of National Natural Science Awards (2014, first winner). His research interests include functional coordination chemistry, MOFs, and molecular magnetism.

Dr Michael J. Zaworotko currently serves as a Bernal Chair of Crystal Engineering & Science Foundation of Ireland Research Professor at the University of Limerick, Ireland. He received his BSc and PhD degrees from Imperial College (1977) and the University of Alabama (1982), respectively. He served as a faculty member at Saint Mary’s University, Nova Scotia, from 1985 to 1998 and at the University of South Florida, USA, from 1999 to 2013. Since 1990, his research activities have focused on fundamental and applied aspects of crystal engineering. Currently, his main interests are in metal–organic materials, especially microporous and nanoporous sorbents, and multi-component pharmaceutical materials (MPMs) such as cocrystals, hydrates and ionic cocrystals. He currently serves as Associate Editor of the ACS journal Crystal Growth & Design.

Dr. Zhenjie Zhang received his BSc and MS degrees from Nankai University (advisor: Professor Peng Cheng). From 2010 to 2014, he studied in Professor Michael J. Zaworotko’s research group at the University of South Florida as a PhD graduate student. From 2014 to 2016, he pursued postdoctoral training in Professor Seth Cohen’s lab at the UCSD. In 2016, he became a full professor of Inorganic Chemistry at Nankai University. His current focus is on separation applications using porous materials including MOFs, COFs and cage compounds; photo-triggered artificial muscles; and heterogeneous photocatalysts. He will serve as a Topic Editor for the ASC journal Crystal Growth & Design from 2019 to 2020.