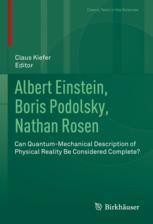 Can Quantum-Mechanical Description of Physical Reality Be Considered Complete?

The work published by Einstein, Podolsky and Rosen (EPR) in 1935 is a classic in modern physics. It discusses, for the first time, the central feature of the quantum theory: entanglement. In general, systems are intertwined with each other in nature; that is, they have only one common, non-divisible state. This fact is responsible for all the oddities commonly associated with quantum theory, including the thought experiments with Schrödinger’s cat and Wigner’s friend. The entanglement of quantum mechanics plays a central role in experiments with atoms and photons (Nobel Prize 2012 for Haroche and Wineland) and the planned construction of quantum computers. This book presents EPR’s original work and a detailed commentary, which examines both the historical context, and all aspects of entanglement. In particular, it focuses on the interpretation of quantum theory and its consequences for a basic understanding of nature.