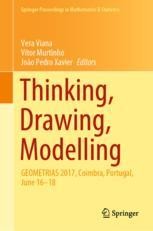 This book presents a selection of papers from the International Conference Geometrias’17, which was hosted by the Department of Architecture at the University of Coimbra from 16 to 18 June 2017. The Geometrias conferences, organized by Aproged (the Portuguese Geometry and Drawing Teachers’ Association), foster debate and exchange on practical and theoretical research in mathematics, architecture, the arts, engineering, and related fields.

Geometrias’17, with the leitmotif “Thinking, Drawing, Modelling”, brought together a group of recognized experts to discuss the importance of geometric literacy and the science of representation for the development of scientific and technological research and professional practices. The 12 peer-reviewed papers gathered here show how geometry, drawing, stereotomy, and the science of representation are still at the core of every act leading to the conception and materialization of form, and highlight their continuing relevance for scholars and professionals in the fields of architecture, engineering, and applied mathematics.

João Pedro Xavier is an Architect and Full Professor at the Faculty of Architecture,University of Porto (FAUP), where he received his initialdegree in 1985 and his Ph.D. in Architecture in 2005. From 1986 to 1999, he worked in Álvaro Siza’s office. At the same time, he established his own practice as an Architect. Xavier is a member of the CEAU research teams Architecture: Theory, Project, History (ATPH) and Digital Fabrication Laboratory (DFL). The relationship between architecture and mathematics, especially perspective, is his main research interest. He is the author of the books Perspectiva, perspectivaacelerada e contraperspectiva (Perspective, accelerated perspective and counter-perspective) and Sobre as origens da perspectivaem Portugal (On the origins of perspective in Portugal). He is a Correspondent Editor of the Nexus Network Journal and a Council Member atthe European Association for Architectural Education (EAAE).

Vitor Murtinho is an Architect and Full Professor at the Department of Architecture,University of Coimbra (UC), Portugal. A Senior Researcher at UC’s Center for Social Studies, his research interests include Renaissance theory, architectonics of form, and geometry. As the UC’s Vice-Rector (March 2011 to February 2019), he was responsible for heritage, buildings, and sustainability. He is the author or co-author of more than one hundred publications (books, book chapters, and papers in journals and conference proceedings). A detailed list of his publications can be found at http://ces.uc.pt/en/ces/pessoas/investigadoras-es/vitor-murtinho/publicacoes.

Vera Viana has been the Director of Aproged (the Portuguese Geometry and Drawing Teachers’ Association) since 2009 and organizes, among other events, the International Conferences “Geometrias.” She is Editor-in-Chief of the Geometrias Conference Proceedings and Aproged’s Bulletins, and serves on the scientific committees of several international conferences. As a Researcher at the University of Porto’sCentre for Studies of Architecture and Urbanism, her work focuses on the connections between architecture and mathematics. Since 2001, she has been engaged in the development of educational resources, particularly on polyhedral geometry with three-dimensional modelling and algorithmic modelling software, and has released a Ph.D. thesis, papers, and presentations on the subject.