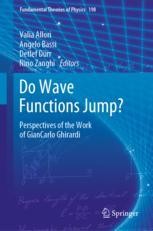 Perspectives of the Work of GianCarlo Ghirardi

This book is a tribute to the scientific legacy of GianCarlo Ghirardi, who was one of the most influential scientists in the field of modern foundations of quantum theory. In this appraisal, contributions from friends, collaborators and colleagues reflect the influence of his world of thoughts on theory, experiments and philosophy, while also offering prospects for future research in the foundations of quantum physics. The themes of the contributions revolve around the physical reality of the wave function and its notorious collapse, randomness, relativity and experiments.

Angelo Bassi was awarded his PhD in 2001. He was Postdoc at ICTP Trieste, then Marie-Curie Fellow at LMU Munich. In 2006 he joined the Department of Physics of the University of Trieste, where now he is associate professor. He published 100+ articles, co-organizer of 20+ international events, was invited speaker at 40+ international conferences and schools. Currently he is PI of the H2020 FET Project TEQ, and chair of the COST Action QTSpace. His research interest are in quantum mechanics and its foundations.

Detlef Dürr studied physics in Münster, Germany, where he obtained his PhD in physics in 1978. After his post-doc years at Rutgers in Joel Lebowitz´s group working with Sheldon Goldstein, he was awarded a Heisenberg fellowship. In 1989 he became a professor of mathematics at the University of Munich. His research interests are non-equilibrium statistical mechanics, Bohmian mechanics, and the foundations of quantum theory.

Valia Allori received her Ph.D. in physics in Genova, Italy, in 2001, and in 2007 she earned her philosophy Ph.D at Rutgers, United States. She joined the Department of Philosophy at Northern Illinois University, when she is now Full Professor. In 2017 she was awarded the Carl and Lily Pforzheimer Foundation Fellowship at the National Humanities Center. She is interested in the foundations of physics, in particular in the foundations of quantum mechanics.

Nino Zanghì  obtained his PhD in Physics in 1986. He is Professor of Theoretical Physics at the University of Genova, Italy. His research concerns mostly the conceptual and mathematical foundations of statistical mechanics and quantum physics. Noteworthy is his work, in collaboration with Detlef  Dürr and Sheldon Goldstein, on the emergence of quantum randomness and the derivation of Born’s rule.