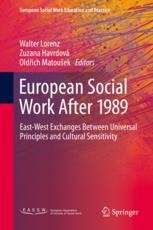 This book presents a unique analysis of the learning derived from East-West contacts in social work and reflects on the discipline's inalienable trans-national dimensions, of high actuality in the face of the re-emergence of nationalisms. The fundamental transformations in Europe subsequent to the revolutions of 1989 had a profound impact on social work in terms of raising sharply the profession’s relationship with politics. The exchanges between western schools of social work and the emergent academic partner institutions in former Communist countries formed a valuable testing ground for the essential principles and competences of social work in terms of their universal scientific basis on the one hand and their regard for cultural and national values and contexts on the other.

The chapters in this contributed volume focus on lessons derived from fundamental social and political transformations, highlighted by East-West encounters and intra-national divisions, and thereby have important messages for mastering impending transformations in the light of the global COVID-19 health crisis. They demonstrate how cultural and social divisions can be addressed constructively with direct implications for training and practice in dramatically changing contexts:

European Social Work After 1989: East-West Exchanges Between Universal Principles and Cultural Sensitivity is an invaluable resource for social work educators; social work practitioners confronted with national and international divisions; students of social work, of social administration and policy; and any policy researcher with a comparative focus.

Walter Lorenz, PhD, MSc, is a recognized expert on European dimensions of social work. German by birth, Dr. Lorenz trained as a social worker at the London School of Economics and practiced for six years in East London, UK, before teaching social work in Ireland and Italy. As president of the European Centre for Community Education, he steered the first Erasmus Thematic Network for the Social Professions in the 1990s and promoted European exchanges, particularly between Schools in Eastern and Western Europe, taking up numerous visiting lectureships in post-communist countries. Together with Hans-Uwe Otto, Dr. Lorenz was co-founder of the International Summer Academy TISSA, and launched the European Journal of Social Work and later the online journal Social Work and Society. Since retiring from the Free University of Bozen, Italy, he holds a visiting appointment at Charles University in Prague, Czech Republic. His research projects and publications deal with comparative issues of European social work and social policy. Dr. Lorenz holds honorary doctorates from the Universities of Ghent (Belgium) and Aalborg (Denmark).

Zuzana Havrdová, doc., PhDr., belongs to the first practitioners and academics who started to develop social work education and numerous social work services and community centres in the Czech Republic after 1989. Being one of the founding members of a social work programme at Charles University in Prague since 1990, Dr. Havrdová participated in the development of minimum standards of education through the Czech Association of Schools of Social Work (ASVSP), and founded and chaired the Board for the Development of Social Work. She developed Czech competence criteria in social work now used in most schools of social work, together with training programmes in supervision for social workers. Dr. Havrdová participated in several international projects and networks with most European countries that led her to research interests on the impact of cultural differences on social work practice and organisations. Her national and international publications reflect these research and practice interests. In 2000, Dr. Havrdová started a new university course in Management and Supervision in Social and Health Organisations, and in 2016, a doctoral program in social work at Charles University that she also chairs.

Oldřich Matoušek, doc., PhDr., is qualified as a psychologist from Charles University in Prague, Czech Republic, and practiced for more than two decades as a clinical psychologist in a psychiatric day hospital. After 1989 Dr. Matoušek co-founded the first university Department of Social Work at Charles University and taught there ever since, serving 10 years as Head of the department. He founded NGO LATA, an organisation that offers voluntary support to youth at risk, and also works as a consultant to several Czech NGOs. Together with notable co-authors, Dr. Matoušek published a basic set of textbooks for social work university students that are widely used in Czech and Slovak universities. He was also chief editor of the first Czech Encyclopedia of Social Work, which comprehensively defined social work as a specific discipline. His Dictionary of Social Work is as widely used as his other monographs on key social work practice themes. Dr. Matoušek participated in several national and international research projects focused on children in care and social work practice. Presently he leads the team of experts from three Czech universities investigating the process of social work professionalization in the Czech Republic.