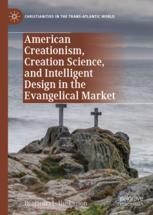 ‘In this compelling and thoroughly researched book, Benjamin Huskinson demonstrates that just as there is broad diversity within evangelicalism, so too there is broad diversity among “creationists.” His work on the Intelligent Design movement is superb, and he prompts me to rethink my long held conviction that Intelligent Design is merely the most recent evolutionary form of creationism. This is a very fine book.’

—Randall Balmer, Author of Evangelicalism in America and writer-host of “In the Beginning”: The Creationist Controversy

‘Benjamin Huskinson's study of American creationism will be an eye-opener for those who sit on the opposite side of the evolution debate. He shows that far from being a unified assault on Darwinism, the campaign was actually a sequence of separate movements launched by rival evangelical groups competing for influence within their own community.’

‘A thoughtful and careful analysis that throws as much light on the diversity of American evangelicalism as it does on Christian attitudes to evolutionary theory. Huskinson offers a smart analysis of religious anti-evolution movements which neither demonises nor ridicules but seeks to understand the tenets and beliefs of a movement far more complex and multivalent than most of us appreciate. A must-read for science communicators.’

This book explores the cultural history of anti-evolution efforts in the United States from 1960 to the present, refuting several popular narratives about creation science in evangelical America. Separating theological terms like “creationism” from cultural movements such as “creation science” and “intelligent design” in an evangelical marketplace of ideas, it contests assumptions that evangelical movements against evolution are homogeneous, and it argues that intelligent design is not an off-shoot of the creation-science movement. It demonstrates that the rationale of creationist groups is relational as well as ideological, showing that the social function of American creationism, which is to establish the boundaries of 'orthodox' religion, is key to understanding the competing strategies of creation-science organisations.
Show all
About the authors

Benjamin Huskinson finished his PhD at Queen's University Belfast, UK. An historian of science and religion, he has also been a guest commentator for BBC Radio on various issues relating to American political behaviour, and a contributing writer to several publications.