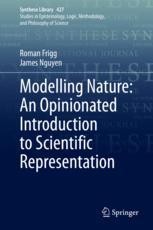 This monograph offers a critical introduction to current theories of how scientific models represent their target systems. Representation is important because it allows scientists to study a model to discover features of reality. The authors provide a map of the conceptual landscape surrounding the issue of scientific representation, arguing that it consists of multiple intertwined problems. They provide an encyclopaedic overview of existing attempts to answer these questions, and they assess their strengths and weaknesses. The book also presents a comprehensive statement of their alternative proposal, the DEKI account of representation, which they have developed over the last few years. They show how the account works in the case of material as well as non-material models; how it accommodates the use of mathematics in scientific modelling; and how it sheds light on the relation between representation in science and art. The issue of representation has generated a sizeable literature, which has been growing fast in particular over the last decade. This makes it hard for novices to get a handle on the topic because so far there is no book-length introduction that would guide them through the discussion. Likewise, researchers may require a comprehensive review that they can refer to for critical evaluations. This book meets the needs of both groups.

He holds a PhD in Philosophy from the University of London and masters degrees both in theoretical physics and philosophy from the University of Basel, Switzerland. His research interests lie in general philosophy of science and philosophy of physics, and he has published papers on climate change, quantum mechanics, statistical mechanics, randomness, chaos, complexity, probability, scientific realism, computer simulations, modelling, scientific representation, reductionism, confirmation, and the relation between art and science. His current work focuses on predictability and climate change, the foundation of statistical mechanics, and the nature of scientific models and theories.

James Nguyen is a Postdoctoral Researcher in the History and Philosophy of Science Program at the University of Notre Dame and a Research Associate of the CPNSS at the LSE. He holds a PhD in Philosophy from the Department of Philosophy, Logic and Scientific Method, also at the LSE, as well as a masters degree from King’s College London and an undergraduate degree from the University of Cambridge. His research interests lie in the general philosophy of science and its intersections with the philosophy of the specific sciences and other areas of philosophy. He has published papers on scientific modeling, scientific representation, the ontology of scientific models, the structure of scientific theories, the relationship between art and science, the applicability of mathematics, and the rationality of theory choice. His current work focuses on developing a comprehensive philosophical account of model based science.