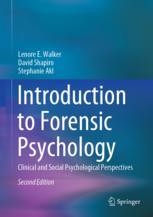 This book provides a broad overview of the history and practice of forensic psychology, illustrating the principles of how psychological knowledge can inform judges and juries in the U.S. legal system with reference to several high publicity cases. The second edition contains new case law and discusses its implications in the major areas of forensics, examining new developments in juvenile justice, malpractice complaints, and reproductive rights, among other topics.

An essential resource for current and aspiring forensic psychologists, the second edition of Introduction to Forensic Psychology serves as a thorough introduction to a complex field, featuring updated cases and related legal developments.

Dr. Walker became known for her expert witness testimony in high publicity cases where battered women killed their abusive partners. Explaining the counter-intuitive behavior of abused women who do not leave their abusive partners, Walker became known for applying research and clinical practice to criminal, family law, and juvenile cases. She also served as O.J. Simpson’s psychologist on his trial as well as televised appearances in other cases. She is author of over 25 books including The Battered Woman Syndrome, 4th Edition, Handbook on Sex Trafficking with Giselle Gaviria & Kalyani Gopal, and Forensic Practice for the Mental Health Clinician with David Shapiro and numerous book chapters and articles in professional journals.

Dr. Shapiro is sometimes known as the ‘father’ of clinical forensic psychology since many forensic psychologists have taken his courses in the many subfields in forensics. Former chief psychologist for the State of Maryland Department of Corrections and director of pre trial evaluationsfor  the forensic division at St. Elizabeth’s Hospital, Shapiro has followed the development of psychology and the law over forty years specializing in both criminal law and in ethics and malpractice issues. He also served as an expert witness in the Lorena Bobbitt case  as well as other high publicity cases. such as John Hinckley.He is author or co-author of over 15 books including Forensic Psychological Assessment: An Integrative Approach, Surviving a Licensing Board Complaint, Malpractice in Psychology: A Practical Resource for Clinicians, Risk Assessment in Clinical Practice, Best Practices for the Mentally Ill in the Criminal Justice System, and Retrying Leopold and Loeb: A Neuropsychological Perspective along with Walker in the  Forensic Practice for the Mental Health Clinician and numerous book chapters and articles in professional journals.

Dr. Stephanie Akl, is in the independent practice of forensic psychology after graduating from the Nova Southeastern University College of Psychology’s clinical forensic program. She is currently an adjunct professor there training doctoral and master’s degree in clinical forensic psychology. She has specialized in family psychology and in assessment and treatment of those experiencing trauma and abuse. She has testified in cases where abused women and children have killed their abusers in self-defense in various states across the U.S. She has developed a virtual reality program for helping train psychologists who want to work in the problem-solving courts after studying the mental health court.
Show all