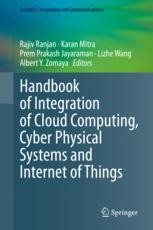 Handbook of Integration of Cloud Computing, Cyber Physical Systems and Internet of Things

Rajiv Ranjan is a Chair Professor for the Internet of Things research in the School of Computing of Newcastle University, United
Kingdom. Before moving to Newcastle University, he was Julius Fellow (2013 - 2015), Senior Research Scientist and Project Leader in the Digital Productivity and Services Flagship of Commonwealth Scientific and Industrial Research Organization (CSIRO – Australian Governments Premier Research Agency). Prior to that he was a Senior Research Associate (Lecturer level B) in the School of Computer Science and Engineering, University of New South Wales (UNSW). He has a Ph.D. (2009) from the department of Computer Science and Software Engineering, the University of Melbourne. He is an internationally established scientist with 260+ scientific publications. He has secured more than \$12 Million AUD (6 Million+ GBP) in the form of competitive research grants from both public and private agencies. He is an innovator with strong and sustained academic and industrial impact and a globally recognized R\&D leader with the proven track record. He serves on the editorial boards of top quality international journals including IEEE Transactions on Computers (2014-2016), IEEE Transactions on Cloud Computing, ACM Transactions on the Internet of Things, The Computer (Oxford University), The Computing (Springer) and Future Generation Computer Systems.

Prem Prakash Jayaraman is an Associate Professor and Head of the Digital Innovation Lab in the Department of Computer Science and Software Engineering, Faculty of Science, Engineering and Technology at Swinburne University of Technology. Previously, he was a PostDoctoral Research Scientist at CSIRO. He is broadly interested in emerging areas of Internet of Things (IoT), and Mobile and Cloud Computing. He is the recipient of two best paper awards at HICSS 2017 and IEA/AIE-2010, and contributor to several industry awards including Black Duck Rookie of the Year Award for Open IoT project (www.openiot.eu). He has (co) authored 75+ journal, conference, and book chapter publications that have received 1200+ google scholar citations (h-index: 20), including two seminal papers in IoT (published by Springer) and Industry 4.0 (published by IEEE).

Albert Y. Zomaya is currently the Chair Professor of High Performance Computing & Networking in the School of Computer Science, University of Sydney. He is also the director of the Centre for Distributed and High Performance Computing, which was established in late 2009. He has published more than 600 scientific papers and articles and is author, co-author or editor of more than 25 books. Currently, he serves as an Editor in Chief of the IEEE Transactions on Sustainable Computing and the ACM Computing Surveys and acts as an associate editor for several leading journals. He has delivered more than 190 keynote addresses, invited seminars, and media briefings and has been actively involved, in a variety of capacities, in the organization of more than 700 national and international conferences. Professor Zomaya is a Fellow of the IEEE, the American Association for the Advancement of Science, the Institution of Engineering and Technology (UK), and Elected Member of Academia Europaea. He is the recipient of the IEEE Technical Committee on Parallel Processing Outstanding Service Award (2011), IEEE Technical Committee on Scalable Computing Medal for Excellence in Scalable Computing (2011), IEEE Computer Society Technical Achievement Award (2014), ACM MSWIM Reginald A. Fessenden Award (2017), and the New South Wales Premier’s Prize of Excellence in Engineering and Information and Communications Technology (2019). His research interests lie in parallel and distributed computing, networking, and complex systems.