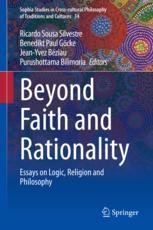 Beyond Faith and Rationality

Essays on Logic, Religion and Philosophy

This volume deals with the relation between faith and reason, and brings the latest developments of modern logic into the scene. Faith and rationality are two perennial key concepts in the history of ideas. Philosophers and theologians have struggled to bring into harmony these otherwise conflicting concepts. Despite the diversity of approaches about what rationality effectively means, logic remains the cannon of objective and rational thought. The chapters in this volume analyze several issues pertaining to the philosophy of religion and philosophical theology from the perspective of their relation to logic and the benefit they can derive from the use of modern logic tools. The book is divided into five parts: (I) Introduction, (II) Analytic Philosophy of Religion, (III) Logical Philosophy of Religion, (IV) Computational Philosophy and Religion and (V) Logic, Language and Religion. This text appeals to students and researchers in the field.

Benedikt Paul Göcke is a Research Fellow at the Ian Ramsey Centre for Science and Religion and a Member of the Faculty of Theology at University of Oxford.  He is also a Member of Blackfriars Hall, Oxford. Göcke is author of:  A Theory of the Absolute  (Macmillan, 2014),  Alles in Gott? (Friedrich Pustet, 2012) and editor of After Physicalism (Notre Dame, 2012). He has published articles in journals such as The International Journal for Philosophy of Religion, Zygon, Sophia, The European Journal for Philosophy of Religion, and Theologie und Philosophie, among others.

Jean-Yves Beziau has a Ph.D. in Mathematics (University of Paris 7) and a Ph.D. in Philosophy (University of São Paulo, Brazil). He has done research in France, Brazil, Poland, California (UCLA, Stanford, UCSD) and Switzerland. He is presently professor of logic in Rio de Janeiro at the University of Brazil, and the President of the Brazilian Academy of Philosophy. He is the promoter of Universal Logic as a general theory of logical structures, the founder and Editor-in-Chief of the journal Logica Universalis and book series Studies in Universal Logic, both published by Birkhäuser/Springer, Basel. He has organized a series of events on universal logic around the world (Montreux 2005, Xi'an 2007, Lisbon 2010, Rio de Janeiro, 2013, Istanbul 2015, Vichy 2018). He has renewed the study of the square of opposition, organizing interdisciplinary world events on the topic (Montreux 2007, Corsica, 2010, Beirut 2012, Vatican 2014, Easter Island 2016, Crete 2018) and the publication of special issues of journals and books. In 2019 he launched on January 14 the 1st World Logic Day which was celebrated in 60 locations around the world and was subsequently approved as an international day of UNESCO.

Purushottama Bilimoria, PhD, is presently a Fulbright-Nehru Distinguished Fellow in India affiliated with Ashoka University. He is also lecturer with Legal Studies in the University of California, Berkeley, and serves as a senior fellow in Indian Philosophy with the Center for Dharma Studies at Graduate Theological Union, in Berkeley. He is otherwise a Honorary Research Professor of Philosophy and Comparative Studies at Deakin University and Senior Fellow at University of Melbourne, in Australia. He is a Permanent Fellow with the Oxford Centre for Hindu Studies in Oxford University, and past visiting scholar at All Souls College, University of Oxford, Harvard University, Emory University and UC Santa Barbara, and Visiting Professor in two universities in Brazil. He is a Co-Editor-in-Chief of Sophia, international journal of philosophy & traditions and of the Journal of Dharma Studies, both published by Springer.