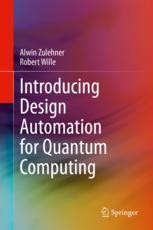 This book offers readers an easy introduction into quantum computing as well as into the design for corresponding devices. The authors cover several design tasks which are important for quantum computing and introduce corresponding solutions. A special feature of the book is that those tasks and solutions are explicitly discussed from a design automation perspective, i.e., utilizing clever algorithms and data structures which have been developed by the design automation community for conventional logic (i.e., for electronic devices and systems) and are now applied for this new technology. By this, relevant design tasks can be conducted in a much more efficient fashion than before – leading to improvements of several orders of magnitude (with respect to runtime and other design objectives).

Alwin Zulehner received his MSc degree as well as his PhD in computer science from the Johannes Kepler University Linz, Austria in 2015 and 2019, respectively. His research interests include design automation for quantum computing. In this area, he has published several papers at international conferences and journals such as the IEEE Transactions on Computer Aided Design of Integrated Circuits and Systems (TCAD), the Asia and South Pacific Design Automation Conference (ASP-DAC), the Design, Automation and Test in Europe (DATE) conference, the Design Automation Conference (DAC), and the International Conference on Computer-Aided Design (ICCAD). For his work, he got awarded with Best Student Awards and won the IBM Qiskit Challenge for his development of a quantum compiler approach.

Robert Wille is Full Professor at the Johannes Kepler University Linz, Austria. He received the Diploma and Dr.-Ing. degrees in Computer Science from the University of Bremen, Germany, in 2006 and 2009, respectively. Since then, he worked at the University of Bremen, the German Research Center for Artificial Intelligence (DFKI), the University of Applied Science of Bremen, the University of Potsdam, and the Technical University Dresden. Since 2015, he is working in Linz. His research interests are in the design of circuits and systems for both conventional and emerging technologies. In these areas, he published more than 300 papers in journals and conferences and served in editorial boards and program committees of numerous journals/conferences. For his research, he was awarded, e.g., with Best Paper Awards, an Under-40 Innovator Award, a Google Research Award, and more.
Show all