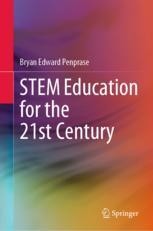 STEM Education for the 21st Century

This book chronicles the revolution in STEM teaching and learning that has arisen from a convergence of educational research, emerging technologies, and innovative ways of structuring both the physical space and classroom activities in STEM higher education. Beginning with a historical overview of US higher education and an overview of diversity in STEM in the US, the book sets a context in which our present-day innovation in science and technology urgently needs to provide more diversity and inclusion within STEM fields. Research-validated pedagogies using active learning and new types of research-based curriculum is transforming how physics, biology and other fields are taught in leading universities, and the book gives profiles of leading innovators in science education and examples of exciting new research-based courses taking root in US institutions. The book includes interviews with leading scientists and educators, case studies of new courses and new institutions, and descriptions of site visits where new trends in 21st STEM education are being developed. The book also takes the reader into innovative learning environments in engineering where students are empowered by emerging technologies to develop new creative capacity in their STEM education, through new centers for design thinking and liberal arts-based engineering.  Equally innovative are new conceptual frameworks for course design and learning, and the book explores the concepts of Scientific Teaching, Backward Course Design, Threshold Concepts and Learning Taxonomies in a systematic way with examples from diverse scientific fields. Finally, the book takes the reader inside the leading centers for online education, including Udacity, Coursera and EdX, interviews the leaders and founders of MOOC technology, and gives a sense of how online education is evolving and what this means for STEM education. This book provides a broad and deep exploration into the historical context of science education and into some of the cutting-edge innovations that are reshaping how leading universities teach science and engineering. The emergence of exponentially advancing technologies such as synthetic biology, artificial intelligence and materials sciences has been described as the Fourth Industrial Revolution, and the book explores how these technologies will shape our future will bring a transformation of STEM curriculum that can help students solve many the most urgent problems facing our world and society.

Professor Bryan E. Penprase  is the Dean of Faculty for the Undergraduate Program at Soka University of America, in Aliso Viejo, CA. He also has been an American Council on Education Fellow at Yale University, Visiting Associate at the California Institute of Technology, and formerly was a Professor of Science at Yale-NUS College, and the Frank P. Brackett Professor at Pomona College, in Claremont, CA. As Dean of Faculty, Bryan directs the undergraduate program at Soka University of America, where he works to advance the innovative undergraduate liberal arts curriuclum and is developing a new interdisciplinary concentration in Life Science.

Bryan received both a BS in Physics and an MS in Applied Physics from Stanford University in 1985, and a PhD from the University of Chicago in Astronomy and Astrophysics in 1992. Prof. Penprase conducts research on the most luminous sources of radiation in the universe: quasars, supernovae, gamma ray bursts, and merging neutron stars, in the context of his collaboration with astrophysicists at Caltech and worldwide on the "Zwicky Transient Facility" or ZTF. The research on such transients has discovered new types of supernovae, new gamma-ray bursts, and gravitational lensing sources. Bryan’s research includes nearly all aspects of observational astrophysics, from photometric observations of nearby asteroids to spectroscopic studies of element formation in the Early Universe, using telescopes such as the Hubble Space Telescope and the Keck Telescope in Hawaii.

Bryan is the author of “The Power of Stars – How Celestial Observations Have Shaped Civilization,” published by Springer, Inc., numerous book chapters on liberal arts education and STEM curriculum, and over 50 peer-reviewed articles, in the Astrophysical Journal, Astronomical Journal, and  in Nature and Science. Bryan has served on numerous NSF and NASA review panels, including the Hubble Space Telescope Time Allocation Committee and the NASA/Keck Time Allocation Committee, and has participated in the external review of the Five College Astronomy Program. His most recent research program is a collaboration with Caltech to develop the Zwicky Transient Facility (ZTF) and a Global Relay of Observatories known as GROWTH for studying gamma ray bursts, new supernovae, and the electromagnetic counterparts of gravitational wave sources.