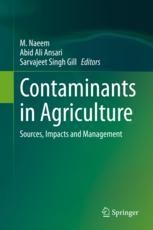 This comprehensive volume covers recent studies into agricultural problems caused by soil and water contamination. Considering the importance of agricultural crops to human health, the editors have focused on chapters detailing the negative impact of heavy metals, excessive chemical fertilizer use, nutrients, pesticides, herbicides, insecticides, agricultural wastes and toxic pollutants, among others, on agricultural soil and crops. In addition, the chapters offer solutions to these negative impacts through various scientific approaches, including using biotechnology, nanotechnology, nutrient management strategies, biofertilizers, as well as potent PGRs and elicitors. This book serves as a key source of information on scientific and engineered approaches and challenges for the bioremediation of agricultural contamination worldwide.

This book should be helpful for research students, teachers, agriculturalists, agronomists, botanists, and plant growers, as well as in the fields of agriculture, agronomy, plant science, plant biology, and biotechnology, among others. It serves as an excellent reference on the current research and future directions of contaminants in agriculture from laboratory research to field application.

Dr. M. Naeem is an Assistant Professor in the Department of Botany at Aligarh Muslim University, India. For more than a decade, he has devoted his research to improving the yield and quality of commercially important medicinal and aromatic plants (MAPs). His research focuses on escalating the production of MAPs and their active principles using a novel and safe technique involving depolymerized polysaccharides as well as the application of potent PGRs. His research also focuses on abiotic stress tolerance in medicinal plants. To date, Dr. Naeem has successfully run three major research projects as the Principal Investigator sponsored by national funding agencies like Department of Science & Technology, New Delhi and Council of Science & Technology UP, Lucknow. Dr. Naeem has published more than 80 research papers in reputable national and international journals as well as seven books. He has also participated in various national and international conferences and acquired life memberships to various scientific bodies in India and abroad. Based on his research contributions, Dr. Naeem has been awarded a Research Associateship from the Council of Scientific & Industrial Research, New Delhi; a Yuva Vaigyanic Samman  (2011) from the State Government of Uttar Pradesh; a Fast Track Young Scientist Award from the Department of Science & Technology, India; a Rashtriya Gaurav Award (2016) from the International Friendship Society, New Delhi, a Young Scientist of the Year Award (2015), a Distinguished Young Scientist of the Year  Award (2017) & a Best Scientist of the Year Award (2018) from the Scientific and Environmental Research Institute, Kolkata; and UGC-BSR Research Start-up Grant (2018) by  UGC, New Delhi

Dr. Abid A. Ansari is an Assistant Professor in the Department of Biology, Faculty of Science, University of Tabuk, Saudi Arabia. Dr. Ansari’s research work is concerned with phytoremediation and eutrophication. He has a number of research articles of national and international repute to his credit. He has written 10 edited books and a number of book chapters on varied aspects of his research. He has been awarded Environmentalist of the Year - 2011’ & ‘Scientist of the Year-2014’ by the National Environmental Science Academy, India and ‘Research Excellence 2016 Award’ by University of Tabuk. He has also participated in various national and international conferences and acquired memberships to various scientific bodies (Saudi Biological Society, International Phytotechnology Society, and Society for Ecological Restoration).

Sarvajeet Singh Gill, serving as an Assistant Professor at Centre for Biotechnology, MD University, Rohtak, India, has made significant contributions towards abiotic stress tolerance in crop plants. His research includes abiotic stress tolerance in crop plants, reactive oxygen species signaling and antioxidant machinery, gene expression, helicases, crop improvement, transgenics, nitrogen & sulfur metabolism and plant fungal symbiotic interactions. Together with Dr. Narendra Tuteja at International Centre for Genetic Engineering and Biotechnology (ICGEB), New Delhi, he worked on plant helicases and discovered a novel function of plant MCM6, PDH45 and p68 in salinity stress tolerance that will help improve crop production at sub-optimal conditions. A recipient of the Junior Scientist of the Year Award 2008 from the National Environmental Science Academy, Dr. Gill has edited several books and has a number of research papers, review articles, and book chapters to his name.