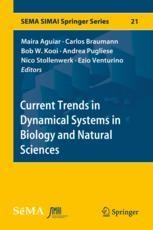 Current Trends in Dynamical Systems in Biology and Natural Sciences

Carlos A. Braumann is Emeritus Professor in the Department of Mathematics and a member of the Research Centre in Mathematics and Applications, Universidade de Évora, Portugal, working on stochastic differential equations and biological applications. He has been an elected member of the International Statistical Institute since 1992 and has been President of both the European Society for Mathematical and Theoretical Biology (2009–12) and the Portuguese Statistical Society (2006–12).

Ezio Venturino received his PhD in Applied Mathematics from SUNY at Stony Brook in 1984. He is currently Professor of Mathematics in the Department of Mathematics, University of Turin, Italy. He has visited a number of international institutions worldwide and has a wide scientific collaboration network. His earlier research focused on numerical analysis, mainly methods for integral equations, and he is currently engaged in research on nonlinear models for biological and ecological applications.

Maira Aguiar is a biologist who has also trained in the mathematical modeling of biological systems, with emphasis on nonlinear dynamics, bifurcation analysis, and biostatistics. Her research investigates problems in public health epidemiology, focusing on the dynamics of vector-borne diseases. She has authored more than 35 papers and is frequently invited as a plenary speaker at international scientific meetings. Since 2018 she has been Vice-President of the European Society of Mathematical and Theoretical Biology.

Nico Stollenwerk received his PhD in theoretical physics from the University of Clausthal. He previously worked at the Research Center Jülich, Germany and is currently the Principal Investigator of the Mathematical Biology group at CMAF, Lisbon University, where he has designed a Biomathematics PhD course. He is a coauthor of the book "Population Biology and Criticality" and has also coauthored many articles in international journals and more than 40 book chapters, as well as refereeing contributions in international congresses.