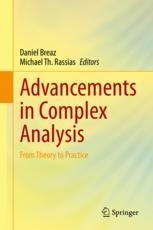 From Theory to Practice

The contributions to this volume are devoted to a discussion of state-of-the-art research and treatment of problems of a wide spectrum of areas in complex analysis ranging from pure to applied and interdisciplinary mathematical research. Topics covered include:  holomorphic approximation, hypercomplex analysis, special functions of complex variables, automorphic groups, zeros of the Riemann zeta function, Gaussian multiplicative chaos, non-constant frequency decompositions, minimal kernels, one-component inner functions, power moment problems, complex dynamics, biholomorphic cryptosystems, fermionic and bosonic operators. The book will appeal to graduate students and research mathematicians as well as to physicists, engineers, and scientists, whose work is related to the topics covered.

Michael Th. Rassias  is a Latsis Foundation Senior Fellow at the University of Zürich, a visiting researcher at the Institute for Advanced Study, Princeton, as well as a visiting Assistant Professor at the Moscow Institute of Physics and Technology. He obtained his PhD in Mathematics from ETH-Zürich in 2014. During the academic year 2014-2015, he was a Postdoctoral researcher at the Department of Mathematics of  Princeton University and the Department of Mathematics of ETH-Zürich, conducting research at Princeton. While at Princeton, he prepared with John F. Nash, Jr. the volume  "Open Problems in Mathematics", Springer, 2016. He has received several awards in mathematical problem-solving competitions, including a Silver medal at the International Mathematical Olympiad of 2003 in Tokyo. In 2014 he was awarded with the Notara Prize by the Academy of Athens. He has authored and edited several books with Springer and has published numerous research papers. His current research interests lie in mathematical analysis, analytic number theory, zeta functions, the Riemann Hypothesis, approximation theory, functional equations and analytic inequalities.

Daniel Breaz has been working in the academic field since 1998 and currently, he is a professor doctor at the "1 Decembrie 1918" University of Alba Iulia and a PhD coordinator in the field of mathematical studies at the “Babes-Bolyai” University of Cluj-Napoca. He graduated from the Faculty of Mathematics and Computer Science, the mathematical section, at "Babeş-Bolyai" University of Cluj-Napoca where he also earned his Master’s degree. In 2002 he earned his PhD in Mathematics, specialization Mathematical Analysis. Daniel Breaz served as Minister of Culture and National Identity and as Interim Minister of Education but he is also known by his prodigious academic activity. He has published over 230 articles in several specialized publications worldwide, he has been an author or a contributor to several science books and participated in dozens of conferences and specialized seminars. His particular interests and research focus are on mathematical analysis, univalent functions, integral operators and geometric theory of functions.. Among the prizes obtained are the Nishiwaki Prize for The Research of Univalent Function Theory, May 21 of 2010, Kyoto, Japan or the "Academic Merit" Medal, awarded in 2016 by the Romanian Academy, Cluj-Napoca branch.