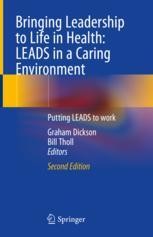 Bringing Leadership to Life in Health: LEADS in a Caring Environment

This edited volume, featuring five new chapters from invited authors, provides an updated and evidence-based explanation of leadership within a healthcare environment. The book discusses new insights garnered from recent research into the importance of leadership in health system redesign and highlights the practice of shared or distributed health care leadership. New chapters covering LEADS in a national, regional, Indigenous, health profession, and people-centred care context provide new insights into how LEADS is being put to work to transform health systems. The LEADS framework has been refreshed in relation to each of its different elements and tools, with an emphasis on providing real-life examples of how LEADS has been put to work. LEADS is also explained as a change leadership model and in relation to how it helps to level the playing field in terms of gender and diversity in health leadership.

The book aims to inform the leadership needs of health reform and its emergent system wide challenges. The content is relevant to health care administrators and professionals working within the public service, academic institutions, and health care delivery organisations.

Graham Dickson is Professor Emeritus at of Leadership Studies at Royal Roads University in Canada. Currently he is working as a Senior Advisor to the Canadian College of Health Leaders, a Senior Research Advisor to the Canadian Society of Physician Leaders and Policy Advisor to the Canadian Health Leadership Network. He is also a member of the LEADS Collaborative, an enterprise established to develop leadership within the health sector in Canada. Graham was co-principal investigator in a cross-Canada research project on LEADS in a Caring Environment capabilities framework. He also consulted with Health Workforce Australia on the creation of Health LEADS Australia, and the New South Wales Leadership Framework (similar to Canada’s LEADS). Graham is a partner in LEADS Global. Over the past five years he has delivered leadership workshops for the Royal Australasian College of Medical Administrators (RACMA) in Australia and the Patient Safety Institute in Belgium. In recent years he has delivered leadership programs for King Abdulaziz Hospital in Saudi Arabia, the Ministry of Health in Bahrain, and InterHealth Canada in the Turks and Caicos Islands. Graham teaches leadership—Strategic Thinking for Results and Leadership Strategies for Physician Engagement—for the Physician Leadership Institute. Graham has also co-authored, with Dr. John Van Aerde on behalf of the Canadian Society of Physician Leaders (CSPL), a White Paper entitled Accepting Our Responsibility: A Blueprint for Physician Leadership, which is currently being used by the CSPL to generate dialogue around the future of physician leadership in Canada. Graham is also doing work with Sanokondu and the World Federation of Medical Managers, two international collaborations that are promoting physician leadership and developing leadership curriculum for residents based on the LEADS framework. Graham has been co-editor—with Karen Owen from RACMA in Australia--of three special edition Emerald Journals, dedicated to medical leadership. Graham has had articles on leadership published in many journals, including Leadership in Health Services, Healthcare Management Forum, and HealthManagement.org—the Journal.

Bill Tholl currently serves as senior executive consultant, mentor and thought leader in health policy and as Senior Policy Advisor to the Canadian Health Leadership Network (CHLNet).  Until retiring in July 2017, he served as the Founding President and CEO of HealthCare CAN:  the voice of Canada’s health care organizations and hospitals. Prior to his appointment in March 2014, Bill was Founding Executive Director of the Canadian Health Leadership Network (2009-2014); CEO and Secretary General, Canadian Medical Association (2001-2008), and CEO of the Heart and Stroke Foundation of Canada (1995-2001). Bill was co-Principal Investigator with Graham in a four-year cross Canada research project on the LEADS framework and has held a number of academic posts over the years, including as an Executive-in-Residence at Royal Roads University (2009-2014) and most recently as a lecturer and mentor in the University of Alberta Fellowship in Health System Improvement program. The Globe and Mail has described Bill as “Medicare’s Mr. Fix-it” for the role he has played in the evolution of Canada’s health care systems.  He is a sought-after speaker, being billed by CHLNet as a “leader of leaders” on the Canadian health scene. He holds a graduate degree in health economics (from University of Manitoba), is a past president of the Canadian Health Economics Association and has written on many topics, most recently as the lead author of a monograph entitled: “Twenty Tips for Surviving and Prospering in the Association World” (Canadian Society of Association Executives 2010) and as co-author (with Graham) of the First Edition of “Bringing Leadership to Life in Health” (Springer, January 2014).  Bill is the recipient of numerous national awards; most recently being appointed an Officer of the Order of Canada. He is a Certified Corporate Director (ICD.D), serving on a number of for-profit and not-for profit Boards.