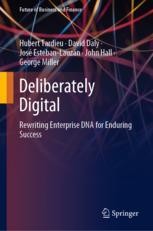 The digital revolution is changing virtually every aspect of the business world. However, most attempts at the digital transformation of enterprises fail – largely because of a lack of comprehensive and coherent strategy. This book takes lessons learned from the rise of the digital platform giants and explores how they can be adapted and effectively applied to established businesses, allowing them to compete within the new digital business paradigm. Offering a holistic perspective on the business and technology landscape, the book describes the megatrends, evolution and impact of digital technologies and business models. It brings together what for many is a disjointed set of business transformation imperatives, to provide a practical guide to digital success.

Drawing on the authors’ decades of experience in supporting transformation and innovation, the book lays out a path to a progressive iteration of business change and value realization, balancing the perspectives of revolutionary transformation and change-enabling optimization.

Hubert Tardieu is advisor to the Atos CEO and Co-Chairman of its Scientific Community created in 2009 and comprising Atos's 150 best Scientists. The Scientific Community contributes to building the five years vision for Atos and publishes its report every two years. He has been a member of the Executive Committee successively in charge of Telecom, Finance and more recently Consulting and Systems Integration. He is the author of several books on Information System Design Methods.

David Daly has worked within the technology industry since 1999 in a variety of roles ranging from software engineering and leading development teams, through to driving operational excellence and Agile and DevOps transformations. He is a Fellow of the British Computer Society, a Chartered IT Professional and a regular public speaker who has a passion for proving that alternative approaches can produce better results.

José Esteban has been working passionately in Innovation and R&D since 1997. He has directed large international research projects and driven transformation initiatives in the public and private sectors. José engages with clients on transformation and thought leadership, supports innovators and intrapreneurs, mentors young talent and likes to challenge the status quo. José is heavily involved in technologies such as Artificial Intelligence and Additive Manufacturing, with a current focus in Unpredictability and Machine Behavior.

John Hall is a Chartered Engineer who has over 30 years’ experience of working in a variety of industries, but always with an IT and digital transformation focus. He has a passion for innovation and change leadership, with a very hands-on approach to exploring the potential of new technologies. John is a regular public speaker who enjoys inspiring others to think differently about digital disruption. Current areas of focus include Blockchain, Quantum Computing and Ethical considerations for AI.

George Miller has spent his entire career as a product and services innovator, and for the last 20 years in business technology innovation, working across all industry verticals and for clients that include a number of the world’s leading firms. His current research interests include: new business models, autonomics and artificial intelligence, and mixed reality.