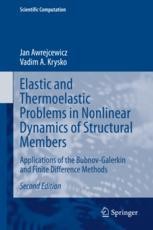 Elastic and Thermoelastic Problems in Nonlinear Dynamics of Structural Members

Applications of the Bubnov-Galerkin and Finite Difference Methods

Adding seven new chapters integrating modern approaches to dynamical systems theory, this revised second edition describes numerical approaches to the nonlinear theory of beams, plates and shells, with an emphasis to the elastic and thermoelastic features. The added chapters discuss in particular how to understand, model, and obtain reliable results while detecting and analysing chaotic dynamics exhibited by thin structural members. The authors attempt to address the large impact of new directions of nonlinear dynamical phenomena in the context of the overall state-of-the art presented in the first book edition. They also present new perspectives of the unsolved problems of thin structural members.

The authors made every effort to keep the text intelligible for both practitioners and graduate students, although they offer a rigorous treatment of both purely mathematical and numerical approaches presented so that the reader can understand, analyse and track the nonlinear dynamics of spatial systems (shells) with thermomechanical behaviours.

From the beginning of his academic career Jan Awrejcewicz has been associated with the Mechanical Faculty of the Lodz University of Technology, where he obtained a master's degree in engineering, a PhD in technical sciences and a postdoctoral degree (habilitatioin). In 1994, he received the title of Professor from the President of Poland. In 1998 he founded the Department of Automation, Biomechanics and Mechatronics, that he is still managing. Since 2013 he has been a member of the Polish Central Commission for Degrees and Titles, and since 2019 also of the Council for Scientific Excellence. He is also an Editor-in-Chief of 3 international journals and member of the Editorial Boards of 90 international journals (23 with IF) as well as editor of 25 books and 28 journal special issues. He also reviewed 45 monographs and textbooks and over 600 journal papers for about of 140 journals. His scientific achievements cover issues related to asymptotic methods for continuous and discrete mechanical systems, taking into account thermoelasticity and tribology, and computer implementations using symbolic calculus, nonlinear dynamics of mechanical systems with friction and impacts, as well as engineering biomechanics. He authored/co-authored over 780 journal papers and refereed international conference papers and 50 monographs. For his scientific merits he recived numerous prestigious awards and distinctions, among them titles of the Honoratry Doctor of Częstochowa University of Technology (2013), University of Technology and Humanities in Bielsko-Biała (2013), Kielce University of Technology (2019), National Technical University "Kharkiv Polytechnic Institute" (2019), and Gdańsk University of Technology (2019).

Vadim Krysko was born in Kiev, Ukraine, on September 21, 1937. He received a master's degree in Civil Engineering from the Saratov State Technical University in 1962. A Ph.D. degree in Mechanics of Solids he obtained from the Saratov State Technical University, USSR in 1967, and D.Sci. degree in Mechanics of Solids he obtained from Moscow Civil Engineering University in 1978. In 1982 he became a full professor, the academic rank of professor obtained from the Department of Higher Mathematics, Saratov State Technical University. He is author/co-author of 329 publications in scientific journals and conference proceedings, 8 monographs in English, 8 monographs in Polish, and 16 monographs in Russian. Topics of his research cover such branches of mechanics as thermoelasticity and thermoplasticity, the theory of optimization of mechanical systems, the theory of propagation of elastic waves upon impact, the theory of coupled problems of thermoelasticity and the interaction of flexible elastic shells with a transonic gas flow, numerical methods for solving nonlinear problems of shells theory. Vadim Krysko was a promoter of 58 PhD (postgraduate student) theses. He is currently the Head of the Department of Mathematics and Modeling, Saratov State Technical University, Russia.  In 2012 he was honored by a title of Doctor Honoris Causa of the Lodz University of Technology, Poland. Vadim Krysko opened and developed novel scientific directions for research in the construction, justification and numerical implementation of new classes of equations of mathematical physics of hyperbolic-parabolic types and proposed effective methods for their numerical solution.