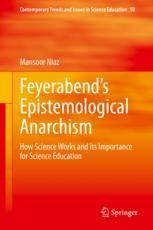 How Science Works and its Importance for Science Education

This book argues that the traditional image of Feyerabend is erroneous and that, contrary to common belief, he was a great admirer of science. It shows how Feyerabend presented a vision of science that represented how science really works. Besides giving a theoretical framework based on Feyerabend´s philosophy of science, the book offers criteria that can help readers to evaluate and understand research reported in important international science education journals, with respect to Feyerabend’s epistemological anarchism. The book includes an evaluation of general chemistry and physics textbooks.

Most science curricula and textbooks provide the following advice to students: Do not allow theories in contradiction with observations, and all scientific theories must be formulated inductively based on experimental facts. Feyerabend questioned this widely prevalent premise of science education in most parts of the world, and in contrast gave the following advice: Scientists can accept a hypothesis despite experimental evidence to the contrary and scientific theories are not always consistent with all the experimental data. No wonder Feyerabend became a controversial philosopher and was considered to be against rationalism and anti-science. Recent research in philosophy of science, however, has shown that most of Feyerabend´s philosophical ideas are in agreement with recent trends in the 21st century. Of the 120 articles from science education journals, evaluated in this book only 9% recognized that Feyerabend was presenting a plurality of perspectives based on how science really works. Furthermore, it has been shown that Feyerabend could even be considered as a perspectival realist. Among other aspects, Feyerabend emphasized that in order to look for breakthroughs in science one does not have to be complacent about the truth of the theories but rather has to look for opportunities to “break rules” or “violate categories.”

Mansoor Niaz carefully analyses references to Feyerabend in the literature and displays the importance of Feyerabend’s philosophy in analyzing, historical episodes. Niaz shows through this remarkable book a deep understanding to the essence of science. - Calvin Kalman, Concordia University, Canada

In this book Mansoor Niaz explores the antecedents, context and features of Feyerabend’s work and offers a more-nuanced understanding, then reviews and considers its reception in the science education and philosophy of science literature. This is a valuable contribution to scholarship about Feyerabend, with the potential to inform further research as well as science education practice.-  David Geelan, Griffith University, Australia

Mansoor Niaz is Professor of Science Education at the Universidad de Oriente, Venezuela. His research interests include the application of history, philosophy of science and cognitive psychology to science education. He has published over 150 articles in international refereed journals and 8 books in the last five years by international publishers.