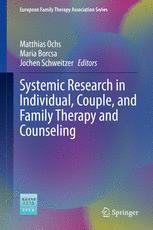 Systemic Research in Individual, Couple, and Family Therapy and Counseling

This book examines systemic family therapy research, addressing key topics across the interrelated disciplines of psychotherapy, social work, and counseling. Drawing from contributions at the 2017 International Systemic Research Conference in Heidelberg, it includes both quantitative and qualitative research perspectives and outlines a wide array of approaches, using systems theory and constructivist epistemology. In addition, the book focuses on innovative paradigms, research strategies, and methods, seeking to bridge the gap between research and practice in the field of systemic family therapy. Finally, it provides guidance on submitting and maximizing the likelihood of research paper acceptance to leading family therapy journals.

Systemic Research in Individual, Couple, and Family Therapy and Counseling is a must-have resource for researchers, professors, and graduate students in family therapy, clinical psychology, general practice/family medicine, and social work as well as all interrelated psychology and medical disciplines.

Matthias Ochs is a Professor of Psychology and Counseling at the Department of Social Work at the Fulda University of Applied Sciences, Germany. He is also a diploma psychologist, a psychological psychotherapist (licensed by German Psychotherapy Law), a Gestalt therapist, a  family therapist and a certified teacher for Systemic Therapy/counseling. His Diploma and PhD theses were honored with research awards. He was Co-President of the two International Systemic Research Conferences in Heidelberg 2014 and 2017, is Vice-President of the German Association for Systemic and Family Therapy and consultation (DGSF), member of the General Board of the European Family Therapy Association (EFTA) and professorial member of the PhD Centre Social work of the official Hessian Universities of Applied Sciences. With Jochen Schweitzer he edited a German systemic research textbook. His current special research interests are: unwanted side effects and negative events in Systemic Therapy/counseling, systems theory/ practice regarding interprofessional/-institutional cooperation and networks, systemic practitioner research, dialogical-systemic practice and the interrelation of social work and psychotherapy.

Maria Borcsa, PhD, is Professor of Clinical Psychology at the University of Applied Sciences in Nordhausen (UASN), Germany, licensed psychological psychotherapist (CBT), family therapist, trainer and supervisor. She is founding member of the Institute of Social Medicine, Health Care Research and Rehabilitation Sciences at UASN, co-editor of the scientific journals “Systeme” (2001-2014), “Psychotherapie im Dialog” (2007-2019), member of the Editorial Board of  the journals "Testing, Psychometrics, Methodology in Applied Psychology", “Contemporary Family Therapy”, advisory editor of “Family Process”, associate editor of “Encyclopedia of Couple and Family Therapy”, and founding editor of the EFTA Family Therapy Book Series. She has been board member of the Systemic Society (Systemische Gesellschaft), German Association for Systemic Research, Therapy, Supervision and Counseling (2005-2011); board member of the European Family Therapy Association (EFTA) (2007-2016), Chair of the Chamber of National Family Therapy Organizations of EFTA (2010-2013), and President of EFTA (2013-2016). Her research interests focus on qualitative methods in mental health and on globalized families. In 2019, she received an award from the European Family Therapy Association for her excellence in the research field of family therapy and systemic practice.

Jochen Schweitzer is Associate Professor of Medical Psychology and Psychotherapy at Heidelberg University Medical School and head of it´s Division of Organizational Psychology in Medicine. He gained his Diploma in Psychology from the University of Gießen in 1978, his doctorate in Social Sciences from the University of Tübingen in 1986 and his habilitation in Medical Psychology and Psychotherapy from Heidelberg University in 1995. In 2002, he co-founded and then co-chaired the Helm Stierlin Institute for Systemic Training in Heidelberg. His primary interests include family therapy in medicine, psychiatry and juvenile services; organizational consultation in non- for-profit institutions; and political contexts of psychosocial practice, e.g. with refugees or poor clients. Among his major projects have been the implementation of family systems Psychiatry (SYMPA) in German Hospitals,  the Heidelberg Systemic Research Conferences from 1998 to 2017,  serving as president (2007-2013)  of the German Association for Systemic and Family Therapy and consultation (DGSF), and gradually with many others helping to introduce Systemic Therapy into evidence- based medicine and health insurance coverage in Germany  between  2003 and 2018. His work was honoured by awards from the American Family Therapy Academy in 2016 and the European Family Therapy Association in 2019.