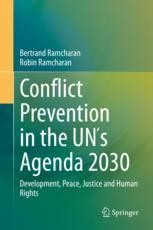 Conflict Prevention in the UN´s Agenda 2030

This book analyses the UN’s Agenda 2030 and reveals that progress is lagging on all five interlocking and interdependent themes that are discussed: conflict prevention, development, peace, justice and human rights. Many voices have already been raised, including that of the UN Secretary-General that the Sustainable Development Goals will not be met by 2030 unless there is a re-doubling of efforts. Still, on development as such, there is much striving.

The book puts the concept of preventive diplomacy into all of the issues of modern international relations, from the US/China confrontation to the various conflicts bedeviling Africa. It bridges the two worlds of the international relations specialist on the one hand and that of the academic interested in UN affairs on the other hand. There is normally little contact between those two specializations. The authors have taken several current issues to show how the millennium debates and the SDG targets are relevant to "realist school" conflicts, and that there is work under way to operationalize ideas and theories in this respect.

This is the first ever discussion of the conflict prevention dimension in the UN’s Agenda 2030 which seeks to advance sustainable development with a view to reinforcing peace and justice on the foundations of respect for universal human rights.

Prof. Dr Bertrand Ramcharan, a Barrister with degrees in philosophy, history and law, has been Chief Speechwriter to the UN Secretary-General, Director of the International Conference on the Former Yugoslavia (Prevention, Peacemaking, Peacekeeping, Peacebuilding), Director in the UN Department of Political Affairs, Under-Secretary-General for Human Rights, Professor at the Geneva Graduate Institute, and Chancellor of the University of Guyana.  He wrote the first draft of Agenda for Peace and has published books on UN preventive diplomacy, peacemaking, peacekeeping and human rights

Dr. Robin Ramcharan, Professor of International Relations (IR) at Webster University Thailand, with qualifications in International History, human rights, IR and International Law.  He is also Executive Director of Asia Centre, a regional think tank and Director of the Research Institute on Preventive Diplomacy in ASEAN (RIPDA), both in Bangkok. He specializes in international security issues, especially traditional and non-traditional security in Southeast Asia. He has held teaching positions in in Canada, India, Switzerland and Thailand, notably at McGill University and the University of Toronto. He was also Professor at Alliance University, Bangalore, India, Visiting Fellow at the Institute of Southeast Asian Studies, Singapore and Visiting Researcher at Jawaharlal Nehru University, New Delhi, India.  He worked in international development cooperation at the World Intellectual Property Organization and in global problem solving at the World Economic Forum.