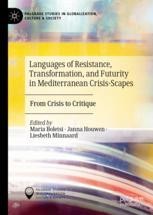 Languages of Resistance, Transformation, and Futurity in Mediterranean Crisis-Scapes

From Crisis to Critique

This collection rethinks crisis in relation to critique through the prism of various declared ‘crises’ in the Mediterranean: the refugee crisis, the Eurozone crisis, the Greek debt crisis, the Arab Spring, the Palestinian question, and others. With contributions from cultural, literary, film, and migration studies and sociology, this book shifts attention from Europe to the Mediterranean as a site not only of intersecting crises, but a breeding ground for new cultures of critique, visions of futurity, and radical imaginaries shaped through or against frameworks of crisis. If crisis rhetoric today serves populist, xenophobic or anti-democratic agendas, can the concept crisis still do the work of critique or partake in transformative languages by scholars, artists, and activists? Or should we forge different vocabularies to understand present realities? This collection explores alternative mobilizations of crisis and forms of art, cinema, literature, and cultural practices across the Mediterranean that disengage from dominant crisis narratives.

Janna Houwen is Assistant Professor of Film and Literary Studies at Leiden University, Netherlands. She is the author of Film and Video Intermediality: The Question of Medium Specificity in Contemporary Moving Images (2017) and co-editor of Legibility in the Age of Signs and Machines (2018).

Liesbeth Minnaard is Assistant Professor of Film and Literary Studies at Leiden University, Netherlands. She is the author of New Germans, New Dutch: Literary Interventions (2008) and co-editor of Challenging the Myth of Monolingualism (2014).

“The book offers a keen and engaging account of the ways in which the term ‘crisis’ might be involved in critical vocabularies that seek to challenge pervasive frameworks of crisis and engender spaces of alternative imageries and imaginaries. Its focus on the Mediterranean crisis-scapes is suggestive in its capacity to invigorate situated critical thought on languages of resistance and futurity. Drawing attention to the production of critical moments of/in intersecting crises, the essays in this volume offer valuable and compelling ways of rethinking what is at stake in the visualization, rhetoricity and affectivity of such languages as they play out in literature, film, art, and other forms of cultural production.” (Athena Athanasiou, Professor of Social Anthropology, Panteion University, Greece, and author of Agonistic Mourning: Political Dissidence and the Women in Black (2017))

“This is an exciting and original volume that asks timely questions about crisis and critique around the Mediterranean. Vigorously engaging with concrete fields and works in the humanities and the social sciences, it also upholds sound theorising. It thus helps clear up conceptual fuzziness and presses scholarship forward.” (Nathalie Karagiannis is a poet and a researcher at the Institut für Sozialforschung in Frankfurt, Germany)

“The contributors to this collection pursue a question that is as necessary as it is audacious: Can we inhabit and recuperate the dominant discourses of “crisis” for the purposes of critique?  Put differently, they dare to ask: Is it possible to rescue from this pervasive and dreary language of “crisis” the promise of the “otherwise.” These engagements with the normalization of “crisis” across the Mediterranean region demand that we remain alert to the unforeseen sociopolitical, cultural, and artistic possibilities. This volume thus reveals anew how the Mediterranean crisis-scape may yet serve as an experimental space for a differential present and alternative futures.” (Nicholas De Genova, editor of The Borders of “Europe”: Autonomy of Migration, Tactics of Bordering (2017))

“This volume offers much-needed insights into the various turbulent events that have troubled Mediterranean countries in recent years. Besides valuable analyses of socio-political developments in specific countries and the "crisis-scapes" surrounding them as well as artistic and literary responses to these developments, the texts in this volume critically scrutinize the role of the term "crisis" in managing border regimes and framing public narratives about these events.” (Stijn De Cauwer, editor of Critical Theory at a Crossroads (Columbia UP 2018))