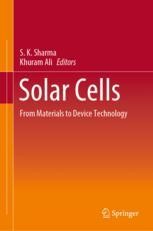 From Materials to Device Technology

This book addresses the rapidly developing class of solar cell materials and designed to provide much needed information on the fundamental principles of these materials, together with how these are employed in photovoltaic applications.

A special emphasize have been given for the space applications through study of radiation tolerant solar cells. This book present a comprehensive research outlining progress on the synthesis, fabrication and application of solar cells from fundamental to device technology and  is helpful  for graduate students, researchers, and technologists engaged in research and development of materials.
Show all
About the authors

Dr. Sharma is a faculty in Materials Science at Department of Physics, Faculty of Science & Technology, The University of the West Indies (UWI), Trinidad & Tobago. Before joining UWI, he worked as a Professor Adjunto (IV) at Department of Physics, Federal University of Maranhao, Brazil (2014–2019). He has received his Ph.D. in Physics from Himachal Pradesh University, Shimla, India. He worked on different research/academic positions in Brazil, France, Czech Republic, India and Mexico from 2007-2014. His research interests include magnetic nanohybrids, their synthesis, characterization and utilization in magnetic and biomedical applications.

Dr. Khuram Ali obtained his Ph.D. in June 2015 from School of Physics, Universiti Sains Malaysia, focusing on the solar cells development for terrestrial as well as space applications. After returning to his home country, he has joined Department of Physics, University of Agriculture Faisalabad as an assistant professor. Dr. Ali has more than ten years of research experience in areas of materials science, semiconductor device physics, photovoltaics, and modelling of solar cells. His research interest includes the area of magnetic nanoparticles, thin films, antireflections coatings for solar cells, photolithography, electrical and optical studies of opto-electronic devices. He has published 17 research articles in international referred journals along with 7 book chapters. He was awarded with three excellence awards and three competitive research grants and currently supervising 3 PhD and 5 Master students. He is also associate member of Abdus Salam Centre for Physics/National Centre of Physics (NCP), Islamabad, Pakistan.