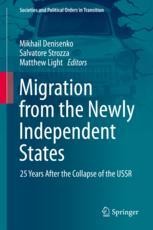 Migration from the Newly Independent States

25 Years After the Collapse of the USSR

This book discusses international migration in the newly independent states after the collapse of the Soviet Union, which involved millions of people. Written by authors from 15 countries, it summarizes the population movement over the post-Soviet territories, both within the newly independent states and in other countries over the past 25 years. It focuses on the volume of migration flows, the number and socio-demographic characteristics of migrants, migration factors and the situation of migrants in receiving countries. The authors, who include demographers, economists, geographers, anthropologists, sociologists and political scientists, used various methods and sources of information, such as censuses, administrative statistics, the results of mass sample surveys and in-depth interviews. This heterogeneity highlights the multifaceted nature of the topic of migration movements.

Mikhail Denisenko is a Deputy Director of the Institute of Demography and the Head of the Department of Demography at the National Research University “Higher School of Economics” (NRU-HSE, Russia). His research interests include demographic analysis and projections, migration regulation, and population and development of the post-Soviet states. He has participated in various research projects, including ‘Replacement migration’ (UN Population Division, 2000), and numerous UNFPA activities in the former Soviet Republics.

Matthew Light is an Associate Professor of Criminology and European, Russian and Eurasian Studies at the University of Toronto, Canada.  He received his doctorate in Political Science from Yale University in 2006.  His research focuses on migration regulation, law enforcement, and criminal justice in post-Soviet countries.  His book, Fragile Migration Rights:  Freedom of Movement in Post-Soviet Russia, was published by Routledge in 2016.  His work has also appeared in various journals, including Theoretical Criminology, Post-Soviet Studies, and Europe-Asia Studies.

Salvatore Strozza is a Full Professor of Demography at the University of Naples Federico II (Italy), Department of Political Sciences. He is the coordinator of the bachelor degree program in Political Science and master’s degrees in International Relations. He is on the editorial board of two international journals: Genus and Studi Emigrazione/Migration Studies.  He was the Vice-Chairman and then Chairman of the Italian Association for Population Studies (AISP). His main fields of research are international migration in Europe and foreign immigration and presence in Italy.
Show all