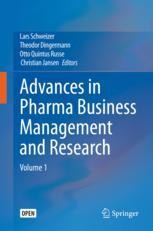 This open access book presents a unique collection of practical examples from the field of pharma business management and research. It covers a wide range of topics such as: 'Brexit and its Impact on pharmaceutical Law - Implications for Global Pharma Companies', 'Implementation of Measures and Sustainable Actions to Improve Employee's Engagement', 'Global Medical Clinical and Regulatory Affairs (GMCRA)', and 'A Quality Management System for R&D Project and Portfolio Management in a Pharmaceutical Company'.

The chapters are summaries of master’s theses by "high potential" Pharma MBA students from the Goethe Business School, Frankfurt/Main, Germany, with 8-10 years of work experience and are based on scientific know-how and real-world experience. The authors applied their interdisciplinary knowledge gained in 22 months of studies in the MBA program to selected practical themes drawn from their daily business.
Show all
About the authors

Prof. Dr. rer. nat. Theodor Dingermann (1948) studied Pharmacy at the University of Erlangen-Nurnberg between 1973 and 1976. In 1980 he received his Ph.D. in Biochemistry. From 1980 to 1982 he worked as a postdoctoral fellow at Yale University, New Haven, USA with Prof. Dr. Dieter Söll. From 1990 to 2013 he was a Professor and Director of the Department of Pharmaceutical Biology at Goethe University Frankfurt/Main. Since 2013 he has been affiliated with the Goethe University as a Senior Professor. Prof. Dingermann received the Carl-Mannich-Medal Award from the German Pharmaceutical Society in 2010, and he was elected “Professor of the Year 2009” in Germany. He is editor-in-chief of the international scientific journal DIE PHARMAZIE, editor-in-chief of “Pharmakon”, the official journal of the German Pharmaceutical Society, and a member of the group of chief editors of the “Pharmazeutische Zeitung”.

At GBS, Prof. Dr. Dingermann is the Academic Director of the Master of Pharma Business Administration.

He is in great demand as a speaker at international events and author of numerous publications.

Christian Jansen has been the Managing Director of Goethe Business School since 2013. Prior to joining GBS, Dr. Jansen worked as a consultant with McKinsey & Company for three years. He holds a diploma in Business Administration from Goethe University Frankfurt and a Master of Business Administration (MBA) degree from the University of Iowa, USA. In 2008, he completed his doctorate at the European Business School.