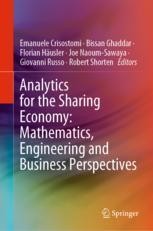 Analytics for the Sharing Economy: Mathematics, Engineering and Business Perspectives

The book provides an encompassing overview of all aspects relating to the sharing economy paradigm in different fields of study, and shows the ongoing research efforts in filling previously identified gaps in understanding in this area. Control and optimization analytics for the sharing economy explores bespoke analytics, tools, and business models that can be used to help design collaborative consumption services (the shared economy). It provides case studies of collaborative consumption in the areas of energy and mobility.

The contributors review successful examples of sharing systems, and explore the theory for designing effective and stable shared-economy models. They discuss recent innovations in and uses of shared economy models in niche areas, such as energy and mobility. Readers learn the scientific challenging issues associated with the realization of a sharing economy. Conceptual and practical matters are examined, and the state-of-the-art tools and techniques to address such applications are explained. The contributors also show readers how topical problems in engineering, such as energy consumption in power grids, or bike sharing in transportation networks, can be formulated and solved from a general collaborative consumption perspective.

Since the book takes a mathematical perspective to the topic, researchers in business, computer science, optimization and control find it useful. Practitioners also use the book as a point of reference, as it explores and investigates the analytics behind economy sharing.

Emanuele Crisostomi received the Bachelor’s degree in computer science engineering, the Master’s degree in automatic control, and the Ph.D. degree in automatics, robotics, and bioengineering, from the University of Pisa, Italy, in 2002, 2005, and 2009, respectively. He is currently an Associate Professor of Electrotechnics with the Department of Energy, Systems, Territory and Constructions Engineering, University of Pisa. His research interests include control and optimization of large-scale systems, with applications to smart grids and green mobility networks. He is a co-author of the recently published book: “Electric and Plug-in Hybrid Vehicle Networks: Optimization and Control” (Crisostomi, Shorten, Stüdli, Wirth), CRC Press, Series: Automation and Control Engineering, 2017. He is currently an Associate Editor for IEEE Access and for Frontiers in Sustainable Cities.

Bissan Ghaddar is an Assistant Professor of Management Science at the Ivey Business School working on problems at the intersection of smart cities, machine learning, and optimization models. Prior to joining Ivey Business School, she was as an Assistant Professor in Data analytics at the Department of Management Sciences at the University of Waterloo. In addition to her academic experience, Prof. Ghaddar has extensive industrial experience. She was a research scientist at IBM Research where she worked on optimization problems for smart cities, mainly in the area of energy, water, and transportation networks and she also worked at the Department of National Defence Canada on developing new models and solution approaches for the integrated repair network planning and spare parts inventory management problems. She was invited for extended research visits at the Universität zu Köln in Germany and the University of Avignon in France. Her work has been published in prestigious journals such as Mathematical Programming, SIAM Journal on Optimization, Transportation Research, among others. Her research has been supported by national and international scholarships including NSERC, Cisco, H2020, and FP7 IIF European Union Grant.

Florian Häusler received the Diploma degree in computer science and business administration from Technische Universität Berlin, Berlin, Germany. He has then been the Deputy Head with the Department of Automotive Services and Communication Technologies, Fraunhofer FOKUS, Berlin, and he received his PhD in 2016 from Technische Universität Berlin, Berlin, Germany, with a thesis on applications on feedback control for intelligent transportation systems in smart cities. He is currently a Product Owner for the moovel Group. His research interests include vehicle-2-x topics, and particularly collaborative mobility, smart mobility solutions, including electric vehicles, car sharing, and intelligent traffic control.

Joe Naoum-Sawaya is an Associate Professor of Management Science at the Ivey Business School, University of Western Ontario, Canada. He holds a Ph.D. in Management Science/Operations Research from the University of Waterloo. Prior to joining Ivey, Joe was a research scientist at IBM Research. Joe’s research focus is on large-scale optimization with applications in smarter cities (energy, mobility, water, and telecommunication). His work has appeared in INFORMS Journal on Computing, European Journal of Operational Research, Transportation Research, and Naval Research Logistics among others. Joe’s research has been supported by grants from the Natural Sciences and Engineering Research Council of Canada. He currently serves as Associate Editor for Information Systems and Operational Research and for Frontiers in Sustainable Cities.

Giovanni Russo is a Lecturer in Cyber–Physical Systems at University College Dublin (UCD). Dr. Russo received his Ph.D. degree from the University of Naples Federico II in 2010. The focus of the work was on the stability of nonlinear dynamical systems with applications to networked control and systems biology. In 2010, Dr. Russo joined Ansaldo STS as a System Engineer and, from 2012 to 2015, he was the Lead System Engineer and Integrator of the Honolulu Rail Transit Project (HRTP) in the United States. From 2015 to 2018, after having completed the HRTP system-level design, Dr. Russo has been with IBM Research Ireland as a Research Staff Member in Optimization, Control and Decision Science. In September 2018, Dr. Russo joined UCD and current research interests include Cyber–Physical Systems, nonlinear dynamics, stochastic systems and networked control systems. Dr. Russo is currently a member of the Board of Editors of IEEE Transactions on Circuits and Systems I: regular papers and of the IEEE Transactions on Control of Network Systems. Dr. Russo is also a Funded Investigator of the Science Foundation Ireland Research Centres I-Form and LERO.

Robert Shorten graduated from UCD, with a B.E. degree in Electronic Engineering in 1990, and a Ph.D. degree in 1996. From 1993 to 1996, Professor Shorten worked at Daimler-Benz research labs in Berlin where completed his Ph.D. work, and was also the holder of a Marie Curie Fellowship. In 1996 he was invited to work as a visiting fellow at the Center for Systems Science, Yale University, commencing a long-standing research collaboration with Professor K. S. Narendra on the study of switched systems. Since returning to Ireland in 1997 as the recipient of a European Presidential Fellowship,  Professor Shorten has been active in a number of theoretical and applied research areas including: computer networking; classical automotive research; collaborative mobility (including smart transportation and electric vehicles); as well as basic control theory and linear algebra. Professor Shorten is a co-founder of the Hamilton Institute, National University of Ireland, Maynooth, where he was a Full Professor until March 2013, and was also the holder of a Visiting Professorship at TU Berlin in 2011-12. From 2013 to 2015 he led the Control and Optimization activities at IBM Research Ireland in the area of Smart Cities. He was Professor of Control Engineering and Decision Science at University College Dublin (UCD) from 2015-2019 as well as consultant to IBM Research Ireland. He is currently Professor of Cyber-physical Design at Imperial College London. Professor Shorten is a co-author of the recently published books: AIMD dynamics and distributed resource allocation (Corless, King, Shorten, Wirth, SIAM 2016). Plug-in Hybrid and Electric Vehicle Networks: Optimization and Control (Crisostomi, Shorten, Stüdli, Wirth, CRC Press, November 2017).