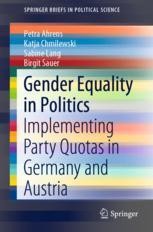 This book provides a timely and unique contribution to current debates on how effectively voluntary party quotas address the persistent underrepresentation of women in legislatures. Using a most similar case design and a mixed-methods approach, the authors draw attention to the ways in which electoral systems and party regulations interface with voluntary party quotas in Germany and Austria. All quota parties in these countries support the goal of equal participation of women and men in elected office, and quotas are presented as a means to precisely that end.

In order to assess parties’ commitment to their declared goals, and the effectiveness of quotas, the book introduces the concept of the post-quota gender gap and defines it as the difference between a party’s adopted quota and the actual share of women in legislative bodies at the national and regional level. Complementing the existing literature on recruitment and socio-cultural legacies, the authors argue that the problem of voluntary party quotas lies at the intersection of party quota design and electoral law. Either parties need to design quotas that actually work within a given electoral system, or we need legislative action geared toward advancing parity not just in candidate selection, but in the composition of legislatures. The book draws on gendered candidate and election data, on the party statutes of federal and state-level party organizations, and on interviews with party officials and party women’s organizations.
Show all
About the authors

Petra Ahrens is a Senior Researcher at the ERC funded research project “Gender, party politics and democracy in Europe: A study of European Parliament’s party groups” (EUGenDem) at Tampere University, Finland. She works on gender equality policies and politics in the European Union and Germany, gendered power relations and political strategies like gender mainstreaming, and on civil society organisations and participatory democracy. She is the author of Actors, Institutions, and the Making of EU Gender Equality Programs (Palgrave Macmillan, 2018). Other recent publications include the co-edited volume (with Lise Rolandsen Agustín) Gendering the European Parliament: Structures, Policies, and Practices (Rowman&Littlefield), and (together with Anna van der Vleuten) “Fish Fingers and Measles? Assessing Complex Gender Equality in the Scenarios for the Future of Europe” JCMS: Journal of Common Market Studies, 2019.

Katja Chmilewski is a PhD Student at the Department of Political Science, University of Vienna, where she has been working as a Junior Researcher since 2015. She currently holds a Marietta Blau scholarship funded by the Austrian Ministry of Science. Her research fields include theories of affect, social movements and political mobilization, health care politics, as well as gender and politics. Recent publications include: Mobilizing affects about intimate relationships – Emotional pedagogy among the New Right in Germany in Kolehmainen, Marjo/Juvonen, Tuula (eds.): Affective Inequalities in Intimate Relationships. New York/ London: Routledge 2018, together with Katharina Hajek.

Sabine Lang is a Professor of European and International Politics at the University of Washington, USA, where she directs the Center for West European Studies and is Chair of the European Studies Program. She has published widely in the area of gender and politics with a focus on participation in political institutions. Her latest co-edited volume with Jill Irvine and Celeste Montoya was published in 2019 with Rowman & Littlefield, titled Gendered Mobilizations and Intersectional Challenges. Other recent publications include “Gender Equality in Post-Unification Germany: Domestic Diffusion and EU-Level Pressures”, German Politics 4, 2017, 556-573, and “Gender Quotas in Germany: Diffusion, Derailment, and the Quest for Parity Democracy”, in: Eléonore Lépinard/Ruth Maria Rubio (eds.) Transforming gender citizenship: The irresistible rise of gender quotas in Europe, Cambridge University Press 2018, pp. 279-307.

Birgit Sauer is a Professor at the Department of Political Science, University of Vienna. She has participated in several international research co-operations and projects on gender, migration, racism and right-wing populism. Recently she conducted two research projects on state transformation and affective governmentality. She was director of the graduate school “Gender, Violence and Agency in the Era of Globalisation” (GIK) at the University of Vienna. Her research fields include gender and governance, gender and politics, feminist state and democratic theory, politics, affects and emotions, and right-wing populism. Recent publications include: Affective governmentality: A feminist perspective, in: Hudson, Christine/Rönnblom, Malin/Teghtsoonian, Katherine (eds.): Gender, Governance and Feminist Analysis. Missing in Action?, London/New York: Routledge 2017, pp. 39-58, together with Otto Penz; and Populism and the Web. Communicative Practices of Parties and Movements in Europe, London: Routledge 2017 (ed. together with Mojca Pajnik).