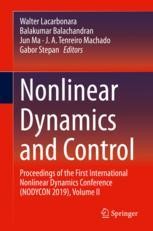 This second of three volumes from the inaugural NODYCON, held at the University of Rome, in February of 2019, presents papers devoted to Nonlinear Dynamics and Control. The collection features both well-established streams of research as well as novel areas and emerging fields of investigation. Topics in Volume II include influence of nonlinearities on vibration control systems; passive, semi-active, active control of structures and systems; synchronization; robotics and human-machine interaction; network dynamics control (multi-agent systems, leader-follower dynamics, swarm dynamics, biological networks dynamics); and fractional-order control.

Walter Lacarbonara earned his MS in Engineering Mechanics from Virginia Tech and his PhD in Structural Dynamics from Sapienza University of Rome where he is currently a Professor of Structural Mechanics. He works on projects supported by AFOSR, NSF, MIUR, EU. He served as co-Chair of the 2015 ASME IDETC (Boston), Chair of NODYCON 2019 (Rome, Italy), Chair of the ASME Technical Committee Multibody Systems and Nonlinear Dynamics (2017-2019). He is Editor in Chief of Nonlinear Dynamics (Springer Nature). He has published a Springer book entitled “Nonlinear Structural Mechanics. Theory, Modeling, Dynamic Phenomena” (2013), 250 publications, and 3 international patents. His research interests include nonlinear structural dynamics; exact modeling of cables/beams/plates/shells; asymptotics; experimental nonlinear dynamics; nonlinear control of vibrations; carbon nanotube nanocomposites.

Gabor Stepan received his degrees at Budapest University of Technology and Economics and is a professor of Applied Mechanics there. He is member of the Hungarian Academy of Sciences and the Academy of Europe. He is ERC Advanced Grant holder and the recipient of the Thomas K. Caughey Dynamics Award of ASME. He was the head of the Department of Applied Mechanics at BME, served as the dean of the Faculty of Mechanical Engineering. He is an elected member of the Executive Committee of the Congress Committee of IUTAM, and serves as a member in Euromech Council. Research interests include nonlinear vibrations and time-delay systems with applications in mechanical engineering: dynamics of elastic wheels, vibrations of robots, force control, human and robotic balancing, rehabilitation robotics, machine tool vibrations, traffic dynamics, hardware-in-the-loop experiments.

Dr. Balachandran received his Ph.D. (Engineering Mechanics) from Virginia Tech.  Currently, he is a Minta Martin Professor of Engineering at the University of Maryland, where he has been since 1993. His research interests include nonlinear phenomena, dynamics and vibrations, and control. The publications that he has authored/co-authored include a Wiley textbook entitled "Applied Nonlinear Dynamics:  Analytical,   Computational,   and   Experimental   Methods"   (1995,   2006),  a Cambridge University Press textbook entitled "Vibrations" (2019), and a co-edited Springer book entitled “Delay Differential Equations: Recent Advances and New Directions” (2009). Currently, he serves as the Editor of the ASME Journal of Computational and Nonlinear Dynamics.  He is a Fellow of ASME and AIAA.

Jun Ma earned his PhD in Physics from Huazhong Normal University, China. He is currently a Professor in the Department of Physics of Lanzhou University of Technology. His research interests cover topics on nonlinear physics, model setting and computational neuroscience.

J. A. Tenreiro Machado was born in 1957. He graduated with ‘Licenciatura’ (1980), PhD. (1989) and ‘Habilitation’ (1995), in Electrical and Computer Engineering at the University of Porto. Between 1980 and 1998 he worked at the Dept. of Electrical and Computer Engineering of the University of Porto. Since 1998 he has been working at the Institute of Engineering, Polytechnic Institute of Porto. Presently he is Principal Coordinator Professor at the Dept. of Electrical Engineering. His research interests include: complex systems, nonlinear dynamics, fractional calculus, entropy, control, data series analysis, biomathematics, evolutionary computing, genomics, and robotics and mechatronics.