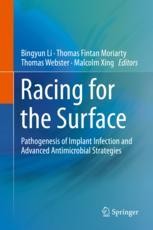 Racing for the Surface

This book covers the latest research in biofilm, infection, and antimicrobial strategies in reducing and treating musculoskeletal, skin, transfusion, implant-related infections, etc. Topics covered include biofilms, small colony variants, antimicrobial biomaterials (antibiotics, antimicrobial peptides, hydrogels, bioinspired interfaces, immunotherapeutic approaches, and more), antimicrobial coatings, engineering and 3D printing, antimicrobial delivery vehicles, and perspectives on clinical impacts. Antibiotic resistance, which shifts the race toward bacteria, and strategies to reduce antibiotic resistance, are also briefly touched on. Combined with its companion volume, Racing for the Surface: Pathogenesis of Implant Infection and Advanced Antimicrobial Strategies, this book bridges the gaps between infection and tissue engineering, and is an ideal book for academic researchers, clinicians, industrial engineers and scientists, governmental representatives in national laboratories, and advanced undergraduate students and post-doctoral fellows who are interested in infection, microbiology, and biomaterials and devices.

Dr Fintan Moriarty is Principal Investigator and Leader of the Musculoskeletal Infection team at the AO Research Institute Davos in Switzerland. He has extensive expertise in the application of preclinical in vivo models to address clinically relevant questions on the problem of fracture-related infection (FRI). Particular interests have been the development of prophylactic and therapeutic strategies against FRI, including those caused by antibiotic resistant pathogens. He has published over 60 peer-reviewed articles and book chapters, and has served as editor of a book on biomaterial associated infection. He is a scientific editor of the eCM Journal, co-organiser of the eCM conference on orthopedic infection, and guest lecturer at the Department Health Science and Technology (D-HEST) of the ETH Zurich.