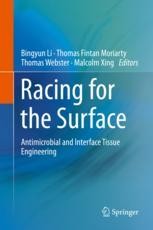 Racing for the Surface

This book covers the key basics of tissue engineering as well as the latest advances in the integration of both antimicrobial and osteoinductive properties. Topics covered include osteoconductive and osteoinductive biomaterials (calcium phosphate, bone morphogenetic protein, peptides, antibodies, bioactive glasses, nanomaterials, etc.) and scaffolds. Research integrating both antimicrobial/biofilm-inhibiting and osteoinductive/osteoconductive properties and their co-delivery is detailed and their roles in clinical success are discussed. Combined with its companion volume, Racing for the Surface: Antimicrobial and Interface Tissue Engineering, this book bridges the gap between infection and tissue engineering, and is an ideal book for academic researchers, clinicians, industrial engineers and scientists, governmental representatives in national laboratories, and advanced undergraduate students and post-doctoral fellows who are interested in tissue engineering and regeneration, infection, and biomaterials and devices.

Bingyun Li is a full Professor with tenure at School of Medicine, West Virginia University. He is a Fellow of the American Institute for Medical and Biological Engineering and an Associate Editor of the Frontiers in Microbiology journal. Professor Li is a member of the Society for Biomaterials (SFB), Orthopedic Research Society (ORS), American Society for Microbiology (ASM), Materials Research Society (MRS), American Chemical Society (ACS), International Chinese Musculoskeletal Research Society (ICMRS), and Chinese Association for Biomaterials (CAB). Professor Li has served as topic chair of Infection and Inflammation of the ORS Program Committee, vice-chair and chair of Orthopedic Biomaterials Special Interest Group of SFB, Chief Editor of ICMRS Newsletter, and inaugural treasurer of CAB. Professor Li’s research focuses on advanced materials, nanomedicine, infection, immunology, and drug delivery. He has published two edited books, 102 articles, 133 abstracts, and 14 provisional/full patents. Professor Li has given 56 invited and keynote talks and has received multiple prestigious awards including the Berton Rahn Prize from AO Foundation, the Pfizer Best Scientific Paper Award from Asia Pacific Orthopedic Association, and the Collaborative Exchange Award from Orthopedic Research Society.
T Fintan Moriarty is group leader of the Musculoskeletal Infection laboratory at the AO Research Institute Davos in Davos Switzerland. The AO Foundation is a medically guided, not-for-profit organization led by an international group of surgeons specialized in the treatment of trauma and disorders of the musculoskeletal system. He is a guest lecturer at the ETH Zurich and Bern University of Applied Sciences lecturing on biomaterial associated infection and musculoskeletal infection. He is scientific editor for the European cells and material (eCM) journal, a highly ranked journal within the biomaterials and orthopedic fields, and organizer of the eCM conference on orthopedic infection. His research focuses on device-related biofilm infections, with a specific focus on fracture related infection. He has previously published a book on biomaterial associated infection and over 70 peer reviewed articles.