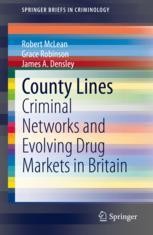 This brief sheds light on evolving drug markets and the county lines phenomenon in the British context. Drawing upon empirical research gathered in the field between 2012-2019 across two sites, Scotland’s West Coast and Merseyside in England, this book adopts a grounded approach to the drug supply model, detailing how drugs are purchased, sold and distributed at every level of the supply chain at both sites.
The authors conducted interviews with practitioners, offenders, ex-offenders and those members of the general public most effected by organised crime. The research explores how drug markets have continued to evolve, accumulating in the phenomenon that is county lines. It explores how such behavior has gradually become ever more intertwined with other forms of organised criminal activity.
Useful for researchers, policy makers, and law enforcement officials, this brief recommends a rethinking of current reactive policing strategies.

Robert McLean is a criminal justice lecturer at the University of the West of Scotland. As well as making a number of media appearances, McLean has also published widely on the topics of gang/group offending, (dis)organised crime, drug harms, and criminal desistance.

James Densley is Professor of Criminal Justice at Metropolitan State University and co-founder of The Violence Project. He has received global media attention for his work on street gangs, criminal networks, violence, and policing. Densley is the author of two prior books, including How Gangs Work (Palgrave Macmillan, 2013), 40 refereed articles in leading social science journals, and over 50 book chapters, essays, and other non-refereed works. He earned his DPhil in sociology from the University of Oxford.