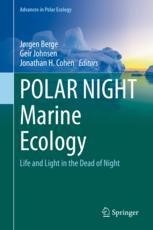 Life and Light in the Dead of Night

Until recently, the prevailing view of marine life at high latitudes has been that organisms enter a general resting state during the dark Polar Night and that the system only awakens with the return of the sun. Recent research, however, with coordinated, multidisciplinary field campaigns based on the high Arctic Archipelago of Svalbard, have provided a radical new perspective. Instead of a system in dormancy, a new perspective of a system in full operation and with high levels of activity across all major phyla is emerging. Examples of such activities and processes include: Active marine organisms at sea surface, water column and the sea-floor. At surface we find active foraging in seabirds and fish, in the water column we find a high biodiversity and activity of zooplankton and larvae such as active light induced synchronized diurnal vertical migration, and at seafloor there is a high biodiversity in benthic animals and macroalgae. The Polar Night is a period for reproduction in many benthic and pelagic taxa, mass occurrence of ghost shrimps (Caprellides), high abundance of Ctenophores, physiological evidence of micro- and macroalgal cells that are ready to utilize the first rays of light when they appear, deep water fishes found at water surface in the Polar night, and continuous growth of bivalves throughout the winter.

These findings not only begin to shape a new paradigm for marine winter ecology in the high Arctic, but also provide conclusive evidence for a top-down controlled system in which primary production levels are close to zero. In an era of environmental change that is accelerated at high latitudes, we believe that this new insight is likely to strongly impact how the scientific community views the high latitude marine ecosystem. Despite the overwhelming darkness, the main environmental variable affecting marine organisms in the Polar Night is in fact light. The light regime during the Polar Night is unique with respect to light intensity, spectral composition of light and photoperiod.

Dr. Jørgen Berge is vice Dean for Research at the Faculty for Bioscience, Fisheries and Economy at UiT The Arctic University of Norway. Professor Berge have worked with Arctic marine ecology since 2003, and was appointed Professor at UNIS in 2006. Since 2012 he has worked at UiT, but also holds adjunct positions connected to the Centre of Excellence AMOS (Automated Marine Operations and Systems) at NTNU and at UNIS. He has organised and led numerous field campaigns and student courses in Arctic regions for the past 20 years. Unprecedented for the Arctic, Berge has initiated and successfully conducted annual multidisciplinary Polar Night field campaigns since 2012. He is currently the principal investigator of several large Norwegian Research ^125 peer-reviewed papers, the majority on Arctic marine ecosystems. He has been an adviser for 12 MSc and 10 PhD students. Currently he advises 4 PhD students.

Dr. Geir Johnsen is a professor in marine biology at Centre for Autonomous Operations and Systems (AMOS) at Dept of biology Norwegian University of Technology and Science (NTNU), Prof II at University Centre on Svalbard (UNIS), and is one of the founding partners in a NTNU spin-off company Ecotone using Underwater Hyperspectral Imagery for mapping and monitoring the marine environment. His research focuses on marine ecology and biodiversity, bio-optics, photosynthesis, pigment chemotaxonomy, underwater robotics and sensor development for in situ ^130 papers in international scientific journals and been a co-editor for the books "Ecosystem Barents Sea" (Tapir Academic Press) and Phytoplankton pigments: Updates on Characterization, Chemotaxonomy and Applications in Oceanography (Cambridge University Press, 2011).  Johnsen has served as advisor for 47 MSc and 17 PhD students graduated. Currently he advises 1 MSc student, 8 PhD students and 2 post docs.

Dr. Jonathan H. Cohen is currently Associate Professor in the School of Marine Science and Policy at University of Delaware in Lewes, DE USA. He received a Bachelor’s degree from Dickinson College, a Ph.D. from Duke University, and was a postdoctoral fellow at the Harbor Branch Oceanographic Institution. He was also in 2017 a MASTS Visiting Fellow at the Scottish Association for Marine Science. His research focuses on the comparative physiology and behavior of marine animals, specifically light and visually mediated behaviors in marine crustaceans inhabiting temperate, deep-sea, and polar environments. He has authored 53 peer-reviewed publications and served as the major professor in research for 9 MS/PhD and 26 undergraduate students.