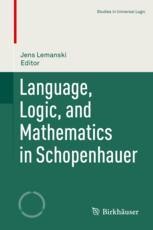 Language, Logic, and Mathematics in Schopenhauer

The chapters in this timely volume aim to answer the growing interest in Arthur Schopenhauer’s logic, mathematics, and philosophy of language by comprehensively exploring his work on mathematical evidence, logic diagrams, and problems of semantics. Thus, this work addresses the lack of research on these subjects in the context of Schopenhauer’s oeuvre by exposing their links to modern research areas, such as the “proof without words” movement, analytic philosophy and diagrammatic reasoning, demonstrating its continued relevance to current discourse on logic.

Beginning with Schopenhauer’s philosophy of language, the chapters examine the individual aspects of his semantics, semiotics, translation theory, language criticism, and communication theory. Additionally, Schopenhauer’s anticipation of modern contextualism is analyzed.  The second section then addresses his logic, examining proof theory, metalogic, system of natural deduction, conversion theory, logical geometry, and the history of logic. Special focus is given to the role of the Euler diagrams used frequently in his lectures and their significance to broader context of his logic. In the final section, chapters discuss Schopenhauer’s philosophy of mathematics while synthesizing all topics from the previous sections, emphasizing the relationship between intuition and concept.

Aimed at a variety of academics, including researchers of Schopenhauer, philosophers, historians, logicians, mathematicians, and linguists, this title serves as a unique and vital resource for those interested in expanding their knowledge of Schopenhauer’s work as it relates to modern mathematical and logical study.

Dr. Jens Lemanski, Privatdozent for Philosophy at the FernUniversität in Hagen, Germany holds a cotutela-Ph.D in philosophy from the Johannes-Gutenberg Universität Mainz and the Università del Salento (Lecce). He has been a research fellow at the Westfaelische Wilhelms-Universitaet Muenster and the Ruhr-Universitaet Bochum. He has published on the history and philosophy of science, metaphysics, logic, and the foundations of mathematics.