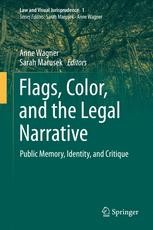 Flags, Color, and the Legal Narrative

The book deals with the identification of “identity” based on culturally specific color codes and images that conceal assumptions about members of a people comprising a nation, or a people within a nation. Flags narrate constructions of belonging that become tethered to negotiations for power and resistance over time and throughout a people’s history. Bennet (2005) defines identity as “the imagined sameness of a person or social group at all times and in all circumstances”. While such likeness may be imagined or even perpetuated, the idea of sameness may be socially, politically, culturally, and historically contested to reveal competing pasts and presents. Visually evocative and ideologically representative, flags are recognized symbols fusing color with meaning that prescribe a story of unity. Yet, through semiotic confrontation, there may be different paths leading to different truths and applications of significance. Knowing this and their function, the book investigates these transmitted values over time and space. Indeed, flags may have evolved in key historical periods, but contemporaneously transpire in a variety of ways.
The book investigates these transmitted values: Which values are being transmitted? Have their colors evolved through space and time? Is there a shift in cultural and/or collective meaning from one space to another? What are their sources? What is the relationship between law and flags in their visual representations? What is the shared collective and/or cultural memory beyond this visual representation? Considering the complexity and diversity in the building of a common memory with flags, the book interrogates the complex color-coded sign system of particular flags and their meanings attentive to a complex configuration of historical, social and cultural conditions that shift over time.

Advance Praise for Flags, Color, and the Legal Narrative
"In an epoch of fragmentation, isolation and resurgent nationalism, the flag is waved but often forgotten. The flag, its colors, narratives, shape and denotations go without saying. The red flag over China, the Star-Spangled Banner, the Tricolore are instantly recognisable and over determined, representing a people, a nation, a culture, languages, legacies, leaders. In this fabulous volume flags are revealed as concentrated, complex, chromatic assemblages of people, place and power in and through time. It is in bringing a multifocal awareness of the modes and meanings of flag and color in public representations that is particular strength. Editors Anne Wagner and Sarah Marusek have gathered critical thinkers from the North and South, East and West, to help know the essential and central - yet often forgotten and not seen - work of flags and color in narratives of nation, conflict, struggle and law. A kaleidoscopic contribution to the burgeoning field of visual jurisprudence, this volume is essential to comprehending the ocular machinery through which power makes, and is seen to make, the world."Kieran Tranter, Chair of Law, Technology and Future, Faculty of Law, Queensland University of Technology, Australia
"This comprehensive volume of essays could not be arriving at a more opportune time. The combined forces of climate change, inequality, and pandemic are causing instability and painful recognitions of our collective uncertainties about nationhood and globalism. In the United States, where I am writing these few lines, our traditional red/white/blue flag has been collapsed into two colors: Red and Blue. While these colors have semiotically deep texts, the division of the country into these two colors began with television stations designing how to report the vote count in the 2000 presidential election year creating "red" and "blue" parties and states. The colors stuck and have become customary. We Americans are told all the time by pundits that we are a deeply divided nation, as proven by unsubtle colored maps. To a statistician, we are a Purple America, though the color is unequally distributed. White, the color of negotiation and peace is rarely to be found. To begin to approach understanding the problems flagged in my brief account requires the insight of multiple disciplines. That is what Wagner and Marusek, wonderful scholars in their own work, have assembled as editors -- a conversation among scholars at the forefront of thinking about how flags and colors represent those who claim them thus exemplifying how to resist simple explanations and pat answers. The topic is just too important."Christina Spiesel, Senior Research Scholar in Law, Yale Law School; Adjunct Professsor of Law, Quinnipiac University School of Law, USA
"Visuals, such as symbols and images, in addition to conventional textual forms, seem to have a unique potential for the study of a collective identity of a community and its traditions, as well as its narratives, and at the same time, in the expression of one’s ideas, impressions, and ideologies in a specific socio-political space. Visual analysis thus has become a well-established domain of investigations focusing on how various forms of text-external semiotic resources, such as culturally specific symbols, including patterns and colors, make it possible for scholars to account for and thus demystify discursive symbols in a wider social and public space. Flags, Identity, Memory: Critiquing the Public Narrative through Colors, as an international and interdisciplinary volume, is a unique attempt to demystify the thinking, values, assumptions and ideologies of specific nations and their communities by analyzing their choice of specific patterns and colors represented in a national flag. It offers a comprehensive and insightful range of studies of visual and hidden discursive processes to understand social narratives through patterns of colours in the choice of national flags and in turn to understand their semiotic, philosophical, and legal cultures and traditions. Wagner and Marusek provide an exclusive opportunity to reflect on the functions, roles, and limits of visual and discursive representations. This volume will be a uniquely resourceful addition to the study of semiotics of colours and flags, in particular, how nations and communities represent their relationship between ideology and pragmatism in the repository of identity, knowledge and history."Vijay K Bhatia, Chinese University of Hong Kong, Full Professor, Hong Kong
"In all societies, colors play a critical function in the realm of symbolism. Nation societies perceive great significance in the colors of flags and national emblems. Colors constitute, in other words, sign systems of national identity. The relation of color codes and their relation to concepts of nationhood and its related narratives is the theme of this marvelous and eye-opening collection of studies. Flags are mini-texts on the inherent values and core concepts that a nation espouses and for this reason the colors that they bear can be read at many levels, from the purely representational to the inherently cultural. Written by experts in various fields this interdisciplinary anthology will be of interest to anyone in the humanities, social sciences, jurisprudence, narratology, political science, and semiotics. It will show how a seemingly decorative aspect of nationhood—the colors on flags—tells a much deeper story about the human condition."Marcel Danesi, University of Toronto, Full Professor of Anthropology, Canada

Anne Wagner is Associate Professor at the Université Lille – Nord de France. She is a research member at the Centre de Recherche Droits et Perspectives du Droit, équipe René Demogue as well as a Research and Adjunct Professor at China University of Political Science and Law (Beijing). She is also President of the International Roundtable for the Semiotics of Law and Vice President of the Multicultural Association of Law and Language. Anne Wagner has been granted the French National Award of Scientific Excellence. She has lectured in Asia, Australia, Europe and North America and extensively published research papers in the area of Legal Cultural Studies, Law and Semiotics, Legal Discourse Analyses.
Sarah Marusek is Professor of Public Law in the Department of Political Science at the University of Hawai‘i Hilo on Hawai‘i Island. Her research interests in jurisprudence focus on exploring how law works in everyday life. She has published research articles in the areas of legal semiotics and legal geography. Sarah Marusek is the 2011 recipient of the University of Hawai‘i Frances Davis Award for Excellence in Undergraduate Teaching and teaches courses in legal geography, constitutive legal theory, and constitutional law.