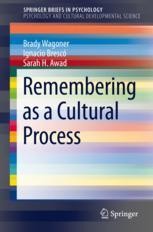 Remembering as a Cultural Process

This brief charts out principles for a cultural psychology of remembering. The idea at its core is a conceptualization of remembering as a constructive process--something that occurs at the intersection of a person and their social-cultural world. To do this, it moves away from the traditional metaphor of memory as storage and develops the alternative metaphor of construction as part of wider social and cultural developments in society. This new approach is developed from key ideas of Lev Vygotsky and Frederic Bartlett, in particular their concepts of mediation and reconstructive remembering. From this foundation, the authors demonstrate how remembering is conflictual, evolving, and transformative at both the individual and collective level. This approach is illustrated with concrete case studies, which highlight key theoretical concepts moving from micro-level processes to macro-level social phenomena.
Among the topics covered are:

Remembering as a Cultural Process traces our ongoing journey to answer the question of the different ways in which culture participates in and is constitutive of what it means for humans to remember. It will be of interest to undergraduate and graduate students as well as researchers in the fields of memory studies or cultural psychology.
Show all
About the authors

Brady Wagoner is Professor of Psychology and Director of the MA and PhD programs in Cultural Psychology at Aalborg University. He received his PhD from the University of Cambridge, where he also co-created the F.C. Bartlett Internet Archive. He is associate editor of the journals Culture & Psychology and Peace & Conflict. His research focuses on the cultural and constructive dimensions of the mind, particularly in relation to memory, imagination and social change. His most recent books include The Constructive Mind: Bartlett’s Psychology in Reconstruction (Cambridge University Press, 2017), Street Art of Resistance with Sarah H. Awad (Palgrave, 2017), Handbook of Culture and Memory (Oxford University Press, 2018) and The Psychology of Radical Social Change with Fathali Moghaddam and Jaan Valsiner (Cambridge University Press, 2018). He has received two early career awards from the American Psychological Association (divisions 24 and 26) and has won research fellowships at Institutes for Advanced Studies in Lyon and Madrid.

Ignacio Brescó de Luna is an Associate Professor at the Department of Communication and Psychology, Aalborg University, Denmark. He is a member of the research Centre for Cultural Psychology, co-founded by the Danish National Research Foundation and AAU under the Niels Bohr Professorships Scheme. He is also a member of the Culture of Grief center, funded by the Obel Foundation. He received a Ph.D. at the Autonomous University of Madrid, where he worked as assistant professor until 2014. His research topics revolve around collective memory, national identity, the teaching of history, and the narrative mediation of remembering. He has co-edited a special issue on collective memory in Culture & Psychology (2017), on memory and conflict in Peace & Conflict (2016) and on cultural psychology in Estudios de Psicología (2019). Among his recent books are: The Psychology of Imagination: History, Theory and New Research Horizons, with Brady Wagoner and Sarah H. Awad (Info Age, 2017) and The Road to Actualized Democracy: A Psychological Exploration, with Brady Wagoner and Vlad Glăveanu (Info Age, 2018).

Sarah H. Awad is an Assistant Professor in general psychology at Aalborg University, Denmark. She received her PhD in Cultural Psychology from Aalborg University and her M.Sc. in social and cultural psychology from London School of Economics and Political Science and her B.A. in mass communication from the American University in Cairo. Her research interests are in the interrelation between the fields of cultural psychology, communication, and social development. She has published work exploring the process by which individuals develop through times of life ruptures and social change using art and storytelling. She has a special interest in visual methodology and the analysis of urban images and their influence on identity, collective memory and politics within a society. Her most recent books include Street Art of Resistance with Brady Wagoner (Palgrave, 2017), and The Psychology of Imagination: History, Theory and New Research Horizons, with Brady Wagoner and Ignacio Brescó de Luna (Info Age, 2017)