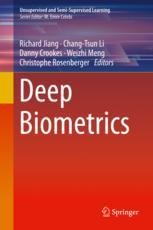 This book highlights new advances in biometrics using deep learning toward deeper and wider background, deeming it “Deep Biometrics”. The book aims to highlight recent developments in biometrics using semi-supervised and unsupervised methods such as Deep Neural Networks, Deep Stacked Autoencoder, Convolutional Neural Networks, Generative Adversary Networks, and so on. The contributors demonstrate the power of deep learning techniques in the emerging new areas such as privacy and security issues, cancellable biometrics, soft biometrics, smart cities, big biometric data, biometric banking, medical biometrics, healthcare biometrics, and biometric genetics, etc. The goal of this volume is to summarize the recent advances in using Deep Learning in the area of biometric security and privacy toward deeper and wider applications.

Richard Jiang is currently a Senior Lecturer (Associate Professor) in the School of Computing & Communications at Lancaster University, UK. Previously, he was a senior lecturer (2013-2019) in the Department of Computer Science and Digital Technologies at Northumbria University, Newcastle, UK. He is a Fellow of HEA, an Associate Member of EPSRC College, and a recognized EPSRC RISE Connector. Dr Jiang's research interest mainly resides in the fields of Biometrics, Privacy & Security, Intelligent Systems, and Biomedical Image Analysis. His recent research has been supported by grants from Qatar National Research Fund (NPRP No.8–140-2–065), EPSRC (EP/P009727/1), Leverhulme Trust (RF-2019-492) and other industry/international funders. He has supervised and co-supervised over 10 PhD students. He authored over 60 publications and three Springer books. He served as TPC member and the reviewer for various conferences and journals.

Professor Chang-Tsun Li received a BSc degree in electrical engineering from National Defense University, Taiwan, the MSc degree in computer science from U.S. Naval Postgraduate School, USA, and the PhD degree in computer science from the University of Warwick, UK. He is currently Professor of Cyber Security at Deakin University and Director of Research of Deakin’s Cyber Security Research and Innovation Centre (CSRI). He has had over 20 years of  research experience in multimedia forensics and security, biometrics, machine learning, data analytics, computer vision, image processing, pattern recognition, bioinformatics and content-based image retrieval. The outcomes of his research have been translated into award-winning commercial products protected by a series of international patents and have been used by a number of law enforcement agencies, national security institutions and companies around the world, including INTERPOL (Lyon, France), UK Home Office, Metropolitan Police Service (UK), Sussex Police Service (UK), Guildford Crown Court (UK), and US Department of Homeland Security. In addition to his active contribution to the advancement of his field of research through publication, Chang-Tsun Li is also enthusiastically serving the international cyber security community. He is currently Vice Chair of Computational Forensics Technical Committee of the International Association of Pattern Recognition (IAPR), Member of IEEE Information Forensics and Security Technical Committee, Associate Editor of IEEE Access, the EURASIP Journal of Image and Video Processing and IET Biometrics. In the past 8 years, Chang-Tsun has been active in facilitating the cross-fertilisation of multimedia forensics and biometrics through his leadership in a number of multinational projects.

Danny Crookes is an emeritus professor in Computer Science, Queens University Belfast, UK. He was appointed to the Chair of Computer Engineering in 1993 at Queens University Belfast, and was Head of Computer Science from 1993 to 2002. He was Director of Research for Speech, Image and Vision Systems at the Institute for Electronics, Communications and Information Technology (ECIT) at Queens University Belfast before he retired in 2017. His current research interests include the use of novel architectures (especially GPUs) for high-performance image processing. He has applied expertise in language design, optimizing compilers and software generators, plus software tools for hardware description and architecture generation, to the goal of developing high level software tools to enable rapid development of real-time video processing systems. He has been currently involved in projects in automatic shoeprint recognition (ESPRC), speech separation and enhancement (EPSRC) and processing of 4D confocal microscopy imagery (sponsored by INI and Andor Technologies). He has published over 200 scientific papers in journals and international conferences, and has presented tutorials on parallel image processing at several international conferences.

Weizhi Meng is currently an assistant professor in the Department of Applied Mathematics and Computer Science, Technical University of Denmark (DTU), Kongens Lyngby, Denmark. He received his B.Eng. degree in Computer Science from the Nanjing University of Posts and Telecommunications, China and obtained his Ph.D. degree in Computer Science from the City University of Hong Kong (CityU), Hong Kong in 2013. He was known as Yuxin Meng and prior to joining DTU, he worked as a research scientist in Infocomm Security (ICS) Department, Institute for Infocomm Research, Singapore. He won the Outstanding Academic Performance Award during his doctoral study. He is a recipient of The HKIE Outstanding Paper Award for Young Engineers/Researchers in both 2014 and 2017, and a co-recipient of the Best Student Paper Award from NSS 2016. His primary research interests are cyber security and intelligent technology in security including intrusion detection, mobile security and authentication, HCI security, cloud security, trust computation, web security, malware and vulnerability analysis. He also shows a strong interest in applied cryptography. He is a member of ACM and IEEE.

Christophe Rosenberger obtained his PhD in Information Technology from the University of Rennes 1 in 1999. His PhD thesis work was undertaken at ENSSAT in Lannion between 1996 and 1999 in the field of hyperspectral image segmentation. He joined the ENSI de Bourges school of engineering in Bourges (known as INSA Centre Val de Loire) as assistant professor in 2000. In 2007, he joined the ENSICAEN’s school of engineering in Caen as full professor. He is actually vice-director of the GREYC research lab composed of 200 members. He belongs to the e-payment and biometrics research unit in the GREYC research lab. His current work focuses in the domain of computer security, in particular research activities in biometrics (keystroke dynamics, soft biometrics, evaluation of biometric systems, fingerprint quality assessment...). He has authored or co-authored over 200 publications among 16 book chapters, 36 international journals and 2 international patents. Since 2015, he serves as Vice-president at Normandy University in charge of the coordination of digital services in Normandy.