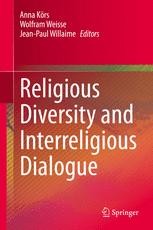 This edited volume offers solutions on the challenges of religious pluralisation from a European perspective. It gives special attention to interreligious dialogue and interfaith relations as specific means of dealing with plurality. In particular, the contributors describe innovative scientific approaches and broad political and social scopes of action for addressing the diversity of beliefs, practices, and traditions.

In total, more than 25 essays bring together interdisciplinary and international research perspectives. The papers cover a wide thematic range. They highlight how religious pluralisation effects such fields as theology, politics, civil society, education, and communication/media. The contributors not only illustrate academic debates about religious diversity but they also look at the political and social scope for dealing with such. Coverage spans numerous countries, and beliefs, from Buddhism to Judaism.

This book features presentations from the Herrenhausen Conference on "Religious Pluralisation - A Challenge for Modern Societies," held in Hanover, Germany, October 2016. This insightful collection will benefit students and researchers with an interest in religion and laicism, interreligious dialogue, governance of religious diversity, and religion in the public sphere.

Anna Körs is scientific manager and vice director of the Academy of World Religions at Hamburg University. She was co-leader of the international research project “Religion and Dialogue in Modern Societies“ (2013-2018) funded by the Federal Ministry of Education and Research, Germany. Her main research interests are the governance of religious diversity, religion and politics, religion and education, interreligious relations and dialogue, congregational studies, sacred spaces. She has recently published on “The Plurality of Peter Berger’s ‘Two Pluralisms‘ in Germany“ in “Society“ (Vol. 54, 2017) and is co-editor of the book “Religion and Dialogue in the City. Case Studies on Interreligious Encounter in Urban Community and Education“ (ed. with Julia Ipgrave, Thorsten Knauth, Dörthe Vieregge, Marie von der Lippe; Waxmann, 2018).

Wolfram Weisse is Senior Research Fellow at the Academy of World Religions at Hamburg University. He is founding director of the Academy of World Religions and leads the international research project “Religion and Dialogue in Modern Societies“ funded by the Federal Ministry of Education and Research, Germany. His main research interests are empirical and theoretical research on religious education, interreligious and intercultural learning in a multicultural context, ecumenical theology, religious education in the context of different European societies. He has published on "Religious Pluralisation and Secularisation in Continental Europe" in "Society", Vol. 53, 2016;  and he is co-editor of the books "Religions and Dialogue. International Approaches" (ed. with Katajun Amirpur, Anna Körs, Dörthe Vieregge: Waxmann 2014) and  "Perspektiven Dialogischer Theologie. Offenheit in den Religionen und eine Hermeneutik des interreligiösen Dialogs" (ed. with Katajun Amirpur, Thorsten Knauth, Carola Roloff; Waxmann 2016).

Jean-Paul Willaime is emeritus director of studies of the Religious Studies section at the École Pratique des Hautes Études, Paris, PSL Research University, Sorbonne,  France. His main research interests are sociology of protestantism, theories and methods in socology of religions, the connection between school and religions, European integration and the relation between state and religions, laicism, democracy and religious pluralism. On the theoretic level he worked out the concept of ultramodernity to portray the issues of secularism in France and Europe. Publications include: Religious and Philosophical Diversity as a Challenge for the Secularism : A Belgian-French Comparison in Religious Pluralism(Giuseppe Giordan and Enzo Pace eds.), Springer International Publishing Switzerland, 2014, pp. 63-72.