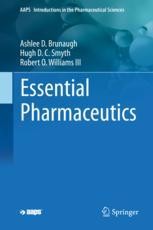 Particularly in healthcare fields, there is growing movement away from traditional lecture style course towards active learning and team-based activities to improve learning and build higher level thinking through application of complex problems with a strong foundation of facts and data. Essential Pharmaceutics is suited to this modern teaching style, and is the first book of its kind to provide the resources and skills needed for successful implementation of an active learning pharmaceutics course.This text offers a format that is specifically suited for integration in an active learning, team-based classroom setting. It is ideal for self-learning for the beginning pharmaceutics student, based upon the extensive utilization of figures, tables, and its overview of essential topics in pharmaceutics. Also unique to this text is the integration of case studies based upon modern pharmaceutical products which are designed to reinforce importance pharmaceutical concepts and teach essential skills in literature review and patent searching. Case studies covering all topics covered in the text have been developed by the authors that allow application of the content in the flipped-classroom pharmaceutical course.

Ashlee D. Brunaugh is a registered pharmacist and Pharm.D. graduate from the University of Texas at Austin College of Pharmacy, where she is now a Ph.D. candidate within the Molecular Pharmaceutics and Drug Delivery Division. She has extensive teaching experience in a variety of Pharm.D. courses as well as multidisciplinary research experience in the pharmaceutical sciences, including protein characterization and formulation, small molecule formulation and characterization, and delivery device design. In 2019, she was awarded a Ruth L. Kirschstein National Research Service Award Predoctoral Fellowship from the National Heart, Lung and Blood Institute of the National Institutes of Health.