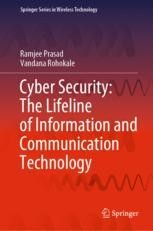 Cyber Security: The Lifeline of Information and Communication Technology

•        Internet of things and Machine to Machine Communication;

Given its scope, the book offers a valuable asset for cyber security researchers, as well as industry professionals, academics, and students.

Dr. Ramjee Prasad, Fellow IEEE, IET, IETE, and WWRF, is a Professor of Future Technologies for Business Ecosystem Innovation (FT4BI) in the Department of Business Development and Technology, Aarhus University, Herning, Denmark. He is the Founder President of the CTIF Global Capsule (CGC). He is also the Founder Chairman of the Global ICT Standardisation Forum for India, established in 2009. GISFI has the purpose of increasing of the collaboration between European, Indian, Japanese, North-American and other worldwide standardization activities in the area of Information and Communication Technology (ICT) and related application areas.

He has received RidderkorsetafDannebrogordenen (Knight of the Dannebrog) in 2010 from the Danish Queen for the internationalization of top-class telecommunication research and education.

He has received several international awards such as: IEEE Communications Society Wireless Communications Technical Committee Recognition Award in 2003 for making contribution in the field of “Personal, Wireless and Mobile Systems and Networks”, Telenor's Research Award in 2005 for impressive merits, both academic and organizational within the field of wireless and personal communication,  2014 IEEE AESS Outstanding Organizational Leadership Award for: “Organizational Leadership in developing and globalizing the CTIF (Center for TeleInFrastruktur) Research Network”, and so on.

He has been Project Coordinator of several EC projects namely, MAGNET, MAGNET Beyond, eWALL and so on.

He has published more than 50 books, 1000 plus journal and conference publications, more than 15 patents, 140 plus PhD Graduates and larger number of Masters (over 250). Several of his students are today worldwide telecommunication leaders themselves.

Dr. Vandana Rohokale received her B.E. degree in Electronics Engineering in 1997 from Pune University, Maharashtra, India. She received her Master’s degree in Electronics in 2007 from Shivaji University, Kolhapur, Maharashtra, India. She received her PhD degree in Wireless Communication in 2013 from CTIF, Aalborg University, Denmark. At present, she is doing her Post-Doctoral research under the guidance of Prof. Ramjee Prasad. She is presently working as Professor, in Sinhgad Institute of Technology and Science, Pune, Maharashtra, India. She has now been teaching for around 22 years. She has published over 50 papers in various international journals and conferences. Her research interests include Cooperative Wireless Communications, AdHoc and Cognitive Networks, Physical Layer Security, Digital Signal Processing, Information Theoretic security and its Applications, Cyber Security, 5G, etc.