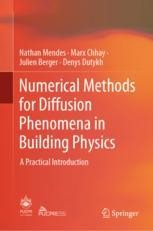 This book is the second edition of Numerical methods for diffusion phenomena in building physics: a practical introduction originally published by PUCPRESS (2016). It intends to stimulate research in simulation of diffusion problems in building physics, by providing an overview of mathematical models and numerical techniques such as the finite difference and finite-element methods traditionally used in building simulation tools. Nonconventional methods such as reduced order models, boundary integral approaches and spectral methods are presented, which might be considered in the next generation of building-energy-simulation tools. In this reviewed edition, an innovative way to simulate energy and hydrothermal performance are presented, bringing some light on innovative approaches in the field.

Nathan Mendes got his Ph.D. in Mechanical Engineering at the Federal University of Santa Catarina, Brazil, in collaboration with the Lawrence Berkeley National Laboratory, USA, in 1997. He is currently full professor and director of graduate studies at the Pontifical Catholic University of Paraná and coordinator of the institutional project of Excellence in Stricto Sensu. He received the Young Scientist Award in 2002, and he is a member of the editorial boards of the Journal of Building Physics and the Journal of Building Performance Simulation. He has more than 80 journal papers and 180 conference papers, 5 patent requirements and software registration and acts as a reviewer of more than 11 peer-reviewed journals and as a member of International Energy Agency Annexes (41, 55, 60 and 68). He coordinated the Post-Graduation Program in Mechanical Engineering at PUCPR from 2006 to 2011, was the president of the Brazilian regional IBPSA (International Association of Building Performance Simulation Association), Brazilian representative at the IBPSA-World since 2005 and the regional director of ASBRAV (2001-2008). He works in the area of Mechanical Engineering, with emphasis on energy, heat and moisture through porous building elements, modeling and experimental analysis of heating and air conditioning systems, energy efficiency of buildings and building simulation. He has participated in national and international advisory committees for evaluation of research projects.

Dr. Denys Dutykh initially graduated in 2004 from the Faculty of Applied Mathematics, Dnipropetrovsk National University in Ukraine. Then, he moved to continue his education at Ecole Normale Supérieure de Cachan (ENS de Cachan), France, where he obtained in 2005 the Master degree (ex-Diplôme d’Etudes Approfondies) in Numerical Methods for Models of Continuous Media (MN2MC). The next logical step was to prepare the PhD thesis. It was done at the Centre de Mathématiques et Leurs Applications (CMLA UMR 8536) under the guidance of Prof. Frédéric Dias. The PhD thesis entitled “Mathematical modelling of tsunami waves” was defended on the 3rd of December 2007 at ENS de Cachan. In October 2008 Denys started to work as CNRS Researcher at the University Savoie Mont Blanc, where he defended his Hanilitation thesis in December 2010 on the topic of “Mathematical Modelling in the Environment”. During the period of 2012 - 2013 he was on leave from CNRS to the Univerisity College Dublin, Ireland to participate in the ERC AdG MultiWave project. Since 2014 he continues to work at the Laboratory of Mathematics (LAMA UMR 5127) again as a CNRS Researcher on a variety topics ranging from Mathematics to its applications in the real world.