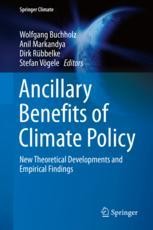 Prof. Dr. Wolfgang Buchholz  studied Mathematics, Economics and Political Science at the Universities of Freiburg and Tübingen, Germany, where he received his Ph.D. in Economics in 1982 and finished his postdoc studies in 1987. In 1988, he became an associate professor of Economics at the University of Regensburg, Germany. After working as a professor at the newly founded European University in Frankfurt (Oder) between 1992 and 1996, he returned to Regensburg as a full professor of Public Economics. His main fields of research are international environmental economics, the theory of public goods, intertemporal evaluation and discounting, social protection and distribution policy and the links between economics and ethics.

Prof. Anil Markandya, Ph.D., graduated from the London School of Economics with an MSc in Econometrics in 1968 and was awarded his Ph.D. on the Economics of the Environment in 1975. Since then, he has divided his time between academic and advisory work. On the academic side, he has published widely in the areas of climate change, environmental valuation, environmental policy, energy and environment, green accounting, macroeconomics and trade. He has held academic positions at the universities of Princeton, Berkeley and Harvard in the US and at University College London and Bath University in the UK. From 2014-2016, he was the President of the European Association of Environmental & Resource Economists (EAERE). Furthermore, he was lead author for chapters of the 3rd and 4th IPCC Assessment Reports on Climate Change. Professor Markandya has also been an advisor to many national and international organizations, including all international development banks, UNDP, the EU and the governments of India and the UK.

Prof. Dr. Dirk T. G. Rübbelke is Professor of Economics at the Technische Universität Bergakademie Freiberg, Germany. Before he joined Technische Universität Bergakademie Freiberg, he was IKERBASQUE Research Professor at the Basque Centre for Climate Change (2010-2014), senior research fellow at the Center for International Climate and Environmental Research, Oslo, Norway (2008-2010) and junior professor at Chemnitz University of Technology, Germany (2002-2008). He is also a research associate at the Centre for European Economic Research (ZEW), Mannheim, and fellow member in the CESifo Research Network, Munich. Prof. Rübbelke has pursued research and taught at internationally renowned universities and research centres, including the Australian National University in Canberra, Hebrew University Jerusalem, Jadavpur University in Kolkata, Max Planck Institute for Tax Law and Public Finance in Munich and the University of Nottingham.

Dr. Stefan Vögele studied Economics at the University of Heidelberg, Germany. From 1994 to 2000, he worked as a research fellow at the Center for European Economic Research (ZEW), Mannheim. In 2000, he was awarded his Ph.D. in Economics. Since 2000, he has been working at the Institute of Energy and Climate Research – Systems Analysis and Technology Evaluation (IEK-STE) at the Forschungszentrum Jülich. He is primarily working in the area of energy economics with special focus on energy scenarios and technology assessment. He was in charge of projects on innovations analysis as well as the future development of power plant stocks and energy systems.