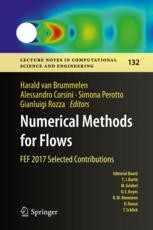 This book includes selected contributions on applied mathematics, numerical analysis, numerical simulation and scientific computing related to fluid mechanics problems, presented at the FEF-“Finite Element for Flows” conference, held in Rome in spring 2017. Written by leading international experts and covering state-of-the-art topics in numerical simulation for flows, it provides fascinating insights into and perspectives on current and future methodological and numerical developments in computational science. As such, the book is a valuable resource for researchers, as well as Masters and Ph.D students.

Harald van Brummelen holds the chair of Multiscale Engineering Fluid Dynamics at Eindhoven University of Technology in the Netherlands. He received an MSc in Mechanical Engineering from Twente University in 1997 and a PhD in Numerical Analysis from the University of Amsterdam in 2002. He is the current Director of the Dutch National Graduate School for Engineering Mechanics and Secretary General of the European Community on Computational Methods in Applied Sciences (ECCOMAS). Professor van Brummelen’s research is concerned with advanced numerical methods for multiscale problems in fluid dynamics and, in particular, adaptive finite element techniques, fluid–structure interaction, rarefied-gas dynamics and Boltzmann’s equation, and phase-field models. He has (co-)authored more than 50 journal papers. He is the local program director of the industrial–private partnership program FIP (Fundamental Fluid-Dynamics Challenges in Inkjet Printing) and principal investigator of the project RareTrans (Transport in Rarefied Gases in Next Generation Photo Lithography Machines).

Alessandro Corsini is Professor of Energy Conversion and Fluid Machinery in the Department of Mechanical and Aerospace Engineering at Sapienza University of Rome. He received his PhD from the Sapienza University of Rome in 1996, and since 1997 has lectured on Thermal Machines and Energy Systems Courses at the university. He has been involved in the development of CFD methods for the prediction of turbulent, incompressible internal flows, with specific emphasis on the development of stabilized formulations for turbomachinery CFD. Professor Corsini has been collaborating with the Team for Advanced Flow Simulation and Modeling TAFSM at Rice University, USA, since 2004. He is active in the field of industrial turbomachinery and energy systems, working on CFD-based design concepts, noise reduction technologies, stall dynamics, and control and fault monitoring. Alessandro Corsini is Associate Editor of the IMechE Journal of Power and Energy and a member of the editorial boards of the International Journal of Rotating Machinery and Periodica Polytechnica. He is a reviewer for international journals in the fields of Energy, Turbomachinery, and Computational Mechanics. He is the author of more than 150 scientific publications and holds nine international patents.

Simona Perotto is Associate Professor in Numerical Analysis at the Department of Mathematics of Politecnico di Milano, Italy. She gained her Master’s degree in Mathematics from the University of Torino in 1995 and her PhD in Computational Mathematics and Operations Research from the University of Milan in 1999. She then spent two years as a postdoc in Scientific Computing and Mathematical Modeling at the EPFL, Lausanne. Her primary research fields cover anisotropic mesh adaptation for computational fluid dynamics problems and adaptive model reduction in the framework of a finite element approximation of partial differential equations. She is the author of more than 50 scientific publications in peer-reviewed journals. Professor Perotto has supervised more than 50 Master’s theses in Engineering at Politecnico di Milano and seven PhD students. She has been Co-PI of the project FIRB2008 on “Advanced Statistical and Numerical Methods for the Analysis of High Dimensional Functional Data in Life Sciences and Engineering”, and of the NSF Project, DMS 1419060, on “Model Reduction Techniques for Incompressible Fluid-Dynamics and Fluid-Structure Interaction Problems” (July 2014 to June 2018). Finally, she has organized several international and national minisymposia, workshops, and conferences, including the 8th edition of the International Conference on Adaptive Modeling and Simulation and the 19th International Conference on Finite Elements in Flow Problems.

Gianluigi Rozza is Professor in Numerical Analysis and Scientific Computing at the International School for Advanced Studies (SISSA), Trieste, Italy. He gained an MSc in Aerospace Engineering from Politecnico di Milano in 2002 and a PhD in Applied Mathematics from EPFL in 2005; he was subsequently a post-doc at MIT. At SISSA Professor Rozza is coordinator of the SISSA doctoral program in Mathematical Analysis, Modelling, and Applications, as well as a lecturer on the Master’s degrees in High Performance Computing, Mathematics, and Data Science and Scientific Computing. He is SISSA Director’s delegate for Valorisation, Innovation, Technology Transfer, and Industrial Cooperation. His research is mostly focused on numerical analysis and scientific computing, developing reduced order methods. He is the author of more than 100 scientific publications, the editor of five books, and the author of two books.   He has been Principal Investigator of the European Research Council Consolidator Grant (H2020) AROMA-CFD and for the project FARE-AROMA-CFD, funded by the Italian Government. Within SISSA mathLab he is responsible for the UBE (Under Water Blue Efficiency), SOPHYA (Seakeeping Of Planing Hull for YAchts) and PRELICA projects within the regional maritime technology cluster MARE FVG, and coordinator of industrial projects with several companies, such as Danieli, Electrolux, and Fincantieri.  He is an associate editor of SIAM SINUM, SIAM/ASA JUQ, Computing and Visualisation in Science, and Mathematics in Engineering. He is a member of the Applied Mathematics Committee of the European Mathematical Society.