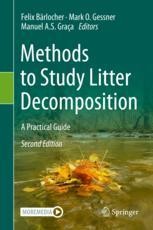 This edited volume is an extensive collection of methods for investigating plant litter dynamics in ecosystems. Particular emphasis is placed on litter decomposition in streams and rivers. The presented methods range from analyses of chemical and physical litter properties to the taxonomic and functional characterization of microbial decomposers, both fungi and bacteria, assessments of litter-consuming invertebrates, and procedures to determine litter dynamics at the stream ecosystem level. Several chapters addressing general topics of data analysis are also included.

This second edition of the book has been greatly expanded. Its now 63 chapters cover both well-established and recently elaborated techniques, some of which have not yet been applied to decomposing litter in streams. Modern molecular techniques ranging from next-generation sequencing to proteomics receive special attention among the 20 chapters that are entirely new. Numerous methods on characterizing litter consumers have also been added to fill an evident gap of the first edition. However, the basic original concept and all of the previous chapters have been retained, although most of them have been thoroughly updated.

Typical contributions provide step-by-step protocols that are preceded by brief reviews of the ecological significance and the principles underlying the method. Where available, short compilations of published data have been added in overview tables to provide background information on the range of results to expect. Useful hints, a discussion of potential weaknesses, and key references are provided at the end. Hands-on material useful to implement several of the presented methods (e.g. computer code, calculation sheets) is available online.

The book is written for students embarking on studies of plant litter dynamics and for established researchers wishing to expand the scope of their methodological toolbox to study litter decomposition and the microbial decomposers and invertebrates involved in the process. The primary intended audience is aquatic ecologists, since many of the methods presented in the book focus on streams and stream organisms. However, the great majority of the protocols can be easily adapted or even directly applied to coastal and terrestrial ecosystems. Consequently, they should be of equal interest to scientists investigating plant litter dynamics in habitats such as mangroves and salt-marshes, terrestrial grasslands and forests.

Felix Bärlocher is a Research Professor at Mt. Allison University, Sackville, New Brunswick, Canada. He retired from teaching in 2016. He has pioneered and published landmark studies on the ecology of aquatic hyphomycetes, a polyphyletic group of fungi that dominate the decomposition of riparian tree leaves in streams. Additional central research interests are the taxonomy and evolution of aquatic hyphomycetes, molecular approaches to characterize these fungi and trophic interactions with litter-consuming invertebrates.

Mark O. Gessner is Department Head at the Leibniz Institute of Freshwater Ecology and Inland Fisheries (IGB) and Professor at the Berlin Institute of Technology (TU Berlin) in Germany. Trained as an aquatic ecosystem scientist, he is widely recognized for his work over 30 years on ecosystem processes, particularly many facets of the decomposition of plant litter in freshwaters, including the role of fungi, bacteria and detritivorous invertebrates, as well as the importance of changing environmental conditions, biodiversity and human activities in controlling decomposition rates.

Manuel A.S. Graça is a Researcher at MARE (Marine & Environmental Sciences Centre) and Professor at the University of Coimbra, Portugal. His extensive work for more than 30 years in Mediterranean and tropical climates has focused on shaded headwater streams, where he investigates particularly the trilogy of leaf litter – microbial decomposers – litter-consuming detritivores and their role in detrital food webs. Studies on anthropogenic impacts on streams and benthic stream invertebrates are also a major long-standing research interest.