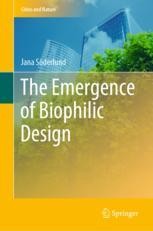 The Emergence of Biophilic Design

This book addresses the emergence of biophilic design, a form of design that looks at people’s intrinsic connection with nature. There is no denying that biophilic design is rapidly expanding globally as an effective response to pressing issues in urban areas and built environments. From being a term few had heard of in 2012, when the author’s research began, to one that is currently trending in a broad range of disciplines, the story of its emergence has never been properly told.

The story of the emergence of biophilic design is the story of a social movement and how a gathering of people with a common interest and passion can spark a global trend. The book and the stories within are not only engaging but also informative and educational, offering readers an in-depth understanding of what biophilic design is all about, and how to promote its implementation in their own built environment. Hopefully, they will inspire people to act, to campaign and to implement initiatives in their urban environment, with the confidence that they are capable of making a difference.

The author spent three years researching the emergence of biophilic design, and why and how it was driven by certain people who championed the concept. Part of the author’s research involved a three-month tour of ten North American cities, during which she interviewed 26 key players. These people ranged from community leaders, landscape architects, and academics, to the CEOs of NGOs and government leaders. The result is a collection of stories that illustrate the evolution of biophilic design, and how it was frequently born from a passion for, belief in and love of nature, as well as a response to an urban crisis.

Dr. Jana Söderlund’s Ph.D. framed biophilic design as an emergent social movement. This was based on global research which involved spending 3 months in the U.S. and Canada researching biophilic design initiatives and policies in 10 frontrunner cities. Interviews were conducted with over 30 leaders in government, industry, NGOs, corporate, and civic arenas. The research was combined with local projects, such as trial living walls in Fremantle and correction centre biophilic initiatives.

A childhood spent exploring the beauty of nature fostered a deep passion for nature. Dr. Söderlund was a pioneer environmental educator. An early career in environmental science, population, and world resources evolved to further studies in sustainability and climate change;  transformative and resilient thinking; and urban design. Since completing her Ph.D. in Biophilic Urban Design, Söderlund has been active as a biophilic designer, presenter, educator, and academic author. She is a member of the global Biophilic Cities steering committee, chair of Biophilic Cities Australia, Director of Biophilic Solutions and Design by Nature, and Director of Green Roofs Australasia.
Show all