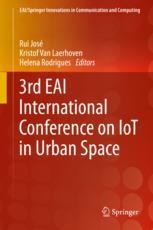 This proceedings presents the papers from Urb-IoT 2018 - 3rd EAI International Conference on IoT in Urban Space, which took place in Guimarães, Portugal on 21-22 November 2018. The conference aims to explore the emerging dynamics within the scope of the Internet of Things (IoT) and the new science of cities.The papers discuss fusion of heterogeneous urban sources, understanding urban data using machine learning and mining techniques, urban analytics, urban IoT infrastructures, crowd sourcing techniques, incentification and gamification, urban mobility and intelligent transportation systems, real time urban information systems, and more. The proceedings discuss innovative technologies that navigate industry and connectivity sectors in transportation, utility, public safety, healthcare, and education. The authors also discuss the increasing deployments of IoT technologies and the rise of the so-called 'Sensored Cities'‚ which are opening up new avenues of research opportunities towards that future.

Rui Jose is an Assistant Professor at the Information Systems Department of the University of Minho. He has a Phd in Computer Science from Lancaster University and his main research interests are ubiquitous computing and interactive environments. He is a member of the Mobile and Ubiquitous Systems Group where he runs the Research Program on Situated Displays for Smart Places, a multi-disciplinary long-term initiative that aims to develop and evaluate a new concept of situated displays as shared, networked, pro-active and strongly situated information artefacts that are situated within a place and provide an execution environment for situated applications.

Kristof Van Laerhoven is a Professor in Ubiquitous Computing at the University of Siegen. Prior to that, he was Professor for Embedded Systems at the University of Freiburg and heading an “Emmy-Noether” Junior Research group (funded by the German Research Foundation – DFG) in Embedded Sensing Systems at the Technical University of Darmstadt. He obtained his Ph.D. degree at Lancaster University (UK) and his Masters degree from the University of Brussels (Belgium). His research focuses on the design and evaluation of wearable and networked embedded systems that are capable of analyzing and detecting phenomena with pattern recognition, data mining, and machine learning algorithms. He was general chair of the 17th International Conference on Wearable Computers (IEEE/ACM ISWC 2013) in Zurich and has published over 100 papers in peer-reviewed journals and conferences on wearable, mobile, and ubiquitous computing, of which several were granted a best-paper award. Helena Rodrigues is Assistant Professor at Faculdade de Ciências Sociais e Humanas – Universidade NOVA de Lisboa and the founder of Laboratory for Music and Communication in Infancy of the research unit CESEM at the same institution. She has been the organizer of multiple innovative initiatives, as diverse as the Bebé Babá Project and the annual International Colloquium Arts for Childhood and Human and Social Development. The author of a number of publications of different kinds, she introduced in Portugal the ideas behind the theory of musical learning by Edwin Gordon. Colwyn Trevarthen has been another strong infuence on her work. She has been practicing on voice and body searching for organic and primary ways to communicate. Aiming to improve artistic practices for infancy, she has been developing innovative approaches to training that she defines as “opening the gates on communicative musicality”. She was a Research Fellow of the Royal Flemish Academy of Belgium for Science and the Arts. She has got several prizes, namely the American Club Award and a Santander prize for academic excellence. She is the artistic director of Companhia de Música Teatral, a group that has specialized in creating artistic and educative projects that have music at the root of interdisciplinary practice. She coordinated Opus Tutti, a project that aimed to create and implement good practices in community for infancy and early childhood. Currently, she coordinates the GermInArte Project which main goal is to design and experiment musical and artistic training addressed to the early years. She is often invited to lecture and give workshops over the world in the topics of early chidhood education, music development, music learning theory, music as a tool for social and human development and arts for infancy.
Show all