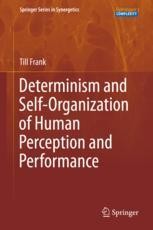 Determinism and Self-Organization of Human Perception and Performance

This book discusses human perception and performance within the framework of the theory of self-organizing systems. To that end, it presents a variety of phenomena and experimental findings in the research field, and provides an introduction to the theory of self-organization, with a focus on amplitude equations, order parameter and Lotka-Volterra equations. The book demonstrates that relating the experimental findings to the mathematical models provides an explicit account for the causal nature of human perception and performance. In particular, the notion of determinism versus free will is discussed in this context.

The book is divided into four main parts, the first of which discusses the relationship between the concept of determinism and the fundamental laws of physics. The second part provides an introduction to using the self-organization approach from physics to understand human perception and performance, a strategy used throughout the remainder of the book to connect experimental findings and mathematical models.

In turn, the third part of the book focuses on investigating performance guided by perception: climbing stairs and grasping tools are presented in detail. Perceptually relevant bifurcation parameters in the mathematical models are also identified, e.g. in the context of walk-to-run gait transitions. Chains of perceptions and actions together with their underlying mechanisms are then presented, and a number of experimental phenomena – such as selective attention, priming, child play, bistable perception, retrieval-induced forgetting, functional fixedness and memory effects exhibiting hysteresis with positive or negative sign – are discussed. Human judgment making, internal experiences such as dreaming and thinking, and Freud’s concept of consciousness are also addressed. The fourth and last part of the book explores several specific topics such as learning, social interactions between two people, life trajectories, and applications in clinical psychology. In particular, episodes of mania and depression under bipolar disorder, perception under schizophrenia, and obsessive-compulsive rituals are discussed.

This book is intended for researchers and graduate students in psychology, physics, applied mathematics, kinesiology, and the sport sciences who want to learn about the foundations of the field. Written for a mixed audience, the experiments and concepts are presented using non-technical language throughout. In addition, each chapter includes more advanced sections for modelers in the fields of physics and applied mathematics.