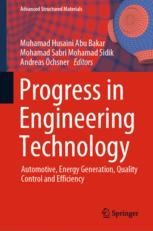 This book presents recent developments in the areas of engineering and technology, focusing on experimental, numerical, and theoretical approaches. In the first part, the emphasis is on the emerging area of electromobility and its sub-disciplines, e.g. battery development, improved efficiency due to new designs and materials, and intelligent control approaches. In turn, the book’s second part addresses the broader topic of energy conversion and generation based on classical (petrol engines) and more modern approaches (e.g. turbines). The third and last part addresses quality control and boosting engineering efficiency in a broader sense. Topics covered include e.g. modern contactless screening methods and related image processing.

Muhamad Husaini Abu Bakar is Director of System Engineering and the Energy Laboratory and Head of the Research and Innovation Section at the Universiti Kuala Lumpur – Malaysian Spanish Institute, Malaysia. After receiving his Bachelor’s degree in Manufacturing Engineering with Management from the Universiti Sains Malaysia (2007), Malaysia, he worked with the university’s Underwater Robotic Research from 2007 to 2012, and was awarded a Master of Science in Advanced Manufacturing in 2011. Since 2012 he has been a lecturer at the Universiti Kuala Lumpur – Malaysian Spanish Institute, and completed his Doctor of Philosophy in Advanced Manufacturing from Universiti Sains Malaysia in 2017. His research interests are related to smart manufacturing, energy, and atomistic modeling. He has published over 50 scientific publications on Deep Learning, computational atomistic and metal-air batteries. His inventions and contributions to smart materials and smart monitoring systems have been recognized with innovation awards from PECIPTA, IIDEX, ICOMPEX, I-ENVEX  and MARA.

Mohamad Sabri Mohamad Sidik completed his Bachelor’s degree in Mechanical Engineering at Universiti Sains Malaysia, Pulau Pinang, in 2005. In the same year, he began working as a mechanical design engineer and handled several projects at a local company until 2009. He subsequently worked as an assistant lecturer at the Universiti Kuala Lumpur Malaysian Spanish Institute, Kedah, Malaysia and was appointed as a Program Coordinator of Diploma of Engineering Technology in Mechanical Design and Development. He received his Master’s degree in Manufacturing System Engineering from the Universiti Putra Malaysia, Selangor, Malaysia in 2012. His research interests in mechanical engineering are in the areas of natural fiber composites, finite element methods for mechanical structures, electric and underwater vehicle design, and metal-air batteries. Currently, he is a doctoral student at the Universiti Kuala Lumpur and is exploring the capabilities of metal clusters, especially in the context of alternative energies.
Show all