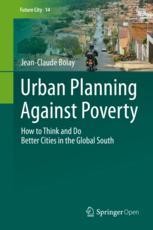 How to Think and Do Better Cities in the Global South

This open access book revisits the theoretical foundations of urban planning and the application of these concepts and methods in the context of Southern countries by examining several case studies from different regions of the world. For instance, the case of Koudougou, a medium-sized city in one of the poorest countries in the world, Burkina Faso, with a population of 115.000 inhabitants, allows us to understand concretely which and how these deficiencies are translated in an African urban context. In contrast, the case of Nueve de Julio, intermediate city of 50.000 dwellers in the pampa Argentina, addresses the new forms of spatial fragmentation and social exclusion linked with agro export and crisis of the international markets. Case studies are also included for cities in Asia and Latin America. Differences and similarities between cases allow us to foresee alternative models of urban planning better adapted to tackle poverty and find efficient ways for more inclusive cities in developing and emerging countries, interacting several dimensions linked with high rates of urbanization: territorial fragmentation; environmental contamination; social disparities and exclusion, informal economy and habitat, urban governance and democracy.

Prof. Jean-Claude Bolay was appointed Director of Cooperation at the Ecole Polytechnique Fédérale de Lausanne [EPFL] in 2001 and has headed what became the Cooperation & Development Center [CODEV] since 2005.

A sociologist by training, he specialized in urban issues in Latin America, Asia, and West Africa. He prepared his PhD in Political Sciences at El Colegio de Mexico, then at UC Berkeley, USA. Before joining EPFL in 1989, he worked for the Swiss Agency for Development and Cooperation [SDC] both in Switzerland and in Cameroon.

He has carried out many international research projects in Vietnam and Latin American countries in particular, looking at social practices in urban societies, sustainable urban development, and poverty reduction in developing countries. He was a scientific advisor and evaluator for the Swiss State Secretariat for Education and Research, the Belgian Universities’ Commission for Development and the French Ministry of Foreign Affairs, among other institutions. At EPFL, he has directed postgraduate courses on development in Africa and India. In parallel to his position as Director of CODEV, he was appointed Adjunct Professor in 2005 in the Laboratory of Urban Sociology of the Natural, Architectural, and Built Environment School at EPFL.

“The book is readable and accessible, integrating perspectives from the literature with the author’s own research and three decades of on-site professional experience. It would be a good addition to university courses in planning, urban studies and geography at upper-level undergraduate or masters level. … It offers valuable insights that can inform planning practice and theoretical understandings of our increasingly urban condition.” (Joshua Kirshner, Buildings & Cities, buildingsandcities.org, September 25, 2020)