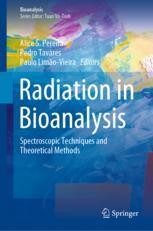 This book describes the state of the art across the broad range of spectroscopic techniques used in the study of biological systems. It reviews some of the latest advances achieved in the application of these techniques in the analysis and characterization of small and large biological compounds, covering topics such as VUV/UV and UV-visible spectroscopies, fluorescence spectroscopy, IR and Raman techniques, dynamic light scattering (DLS), circular dichroism (CD/SR-CD), pulsed electron paramagnetic resonance techniques, Mössbauer spectroscopy, nuclear magnetic resonance, X-ray methods and electron and ion impact spectroscopies.

The second part of the book focuses on modelling methods and illustrates how these tools have been used and integrated with other experimental and theoretical techniques including also electron transfer processes and fast kinetics methods.

The book will benefit students, researchers and professionals working with these techniques to understand the fundamental mechanisms of biological systems.

Alice S. Pereira received her PhD from Universidade NOVA de Lisboa in 1995 on Bioinorganic Chemistry. During that period, she worked on metalloenzymes from sulfate-reducing bacteria studying both structural and mechanistic aspects of several enzymes involved in the dissimilatory sulfate reduction. Subsequently she was a Postdoctoral Fellow at the University of South Florida (1995) and at Emory University (1995–1997), USA. From October 1997 to March 2000 she was part of Centro de Química Física e Biotecnologia,  Department of Chemistry, Universidade NOVA de Lisboa as a Postdoctoral Fellow. She has been a faculty member in the Department of Chemistry of Universidade Nova de Lisboa since 2000. She is actively involved in teaching biochemistry and biophysics at undergraduate and post-graduate levels, being the recipient of several consecutive best teachers awards, and in raising science awareness being involved in pioneering efforts for science dissemination to primary, middle and upper secondary school. Her research is currently focused on the study of metalloenzymes involved in iron metabolism. She has been successfully using spectroscopic tools, in particular UV/Visible, EPR and Mössbauer spectroscopies for biomolecule characterization, during her entire research career. (ResearcherID:  D-7779-2013; ORCID: 0000-0001-5567-6073)

Pedro Tavares received his PhD from Universidade NOVA de Lisboa in 1994 on Physical Biochemistry. His work focused on the structural characterization of iron-sulfur and non-heme iron proteins using mainly biochemical and spectroscopic tools such as EPR and Mössbauer spectroscopies. In 1995, he joined the Physics Department of Emory University, USA, as a postdoctoral research fellow. Since 1999, he has been a faculty member in the Department of Chemistry, Universidade NOVA de Lisboa. He has been involved in teaching instrumental methods of analysis and applied spectroscopy to biochemistry undergraduate and post-graduate students. His current research interests are centered on the study of catalytic mechanisms of iron-containing enzymes implicated in ROS defense mechanisms and effects at protein level. In a more applied perspective, he initiated studies involving the effects of cosmic radiation and oxidative stress in airline pilots and the use/valorization of natural products with antioxidant effects. He frequently uses spectroscopic tools to study single turnover of enzyme systems employing fast kinetics methodologies. (ResearcherID:  B-3654-2008; ORCID: 0000-0002-7398-2661)

Paulo Limão-Vieira is a member of staff at Universidade NOVA de Lisboa, Portugal since 1995 and is currently a Professor in Physics. He moved to University College London in 2001 as PhD student working on the electronic state spectroscopy of biomolecules, aeronomic and plasma processing molecules by interaction with photons and electrons. He received his PhD in 2003 from University of London, UK. Upon his return in 2004 to Universidade NOVA de Lisboa he engaged in teaching classical mechanics and atomic and molecular physics to undergraduates as well as molecular spectroscopy for post-graduates. His teaching experience led to deliver different undergraduate and post-graduate lecture courses in foreign universities, keeping a visiting professor appointment with Sophia University, Tokyo, Japan. Since March 2004 his research main topic has been centred on charge transfer processes in atom-molecule collisions, anion-molecule collisions, dissociative electron attachment and the role of negative ions formation. Other research interests include positron scattering from atoms and molecules. From 2008 he serves as Head of Research at Centre of Physics and Technological Research, Universidade NOVA de Lisboa. (ResearcherID:  K-2115-2013; ORCID: 0000-0003-2696-1152)