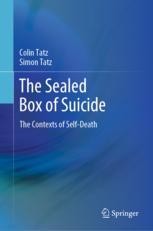 The Sealed Box of Suicide

The Contexts of Self-Death

This unique book explores suicide as more than just a manner of death. It challenges the myths, beliefs, dogma, and customs of suicide from the earliest theories. It offers fresh insights into dark spaces. World-wide, suicide deaths are three times greater than homicides, and are increasing. Current approaches to stem this ‘epidemic’ are not working, or have very limited success. Mental health interventions, theories about a suicide or a depression gene, and the ever-increasing dispensing of antidepressants have not lessened the stark statistics.
The authors attempt to understand the soul of the suicide — addressing the social, economic, political, historical, geographic, and cultural contexts in which suicide occurs. The social order is indelibly connected to settings, places, circumstances, relationships, occupations, climate, and milieus. Most of the 36 diverse categories of self-motivated deaths defy a ‘one-size-fits-all’ approach. Recognising contexts and looking outside the confines that have imprisoned thinking about suicide, could well be more effective in alleviating or mitigating suicide than years searching for a possible vaccination against such death.
The book is an appeal to move beyond the medical model of suicide. Written in a very accessible style, it is of interest to social scientists, philosophers, professionals and researchers in public health, medical and behavioural sciences, and lay persons alike.

A critical, stimulating and moral tale of suicide that provides a new look

Colin Tatz has been an Australian academic sociologist and political scientist since 1964. His main interests are comparative race politics, genocide studies, Aboriginal studies, migration, youth suicide, and sport history. He held chairs of Politics at the University of New England (Armidale, NSW) and at Macquarie University (Sydney) from 1971 to 1999, and has been a visiting scholar at ANU since 2004. He is the author of 26 books, including Aboriginal Suicide is Different: A Portrait of Life and Self-Destruction (2005).

Simon  Tatz (BA Hons) has extensive experience in the health sectors in Australia, including Director of Public Health for the Australian Medical Association (AMA) and Director of Communications for Mental Health Australia. For over a decade Simon was senior advisor to senior federal parliamentarians, ministers and shadow ministers.  Simon writes essays and opinion pieces for a number of media outlets. The views expressed are personal and not attributable to any of my workplaces.

“Colin and Simon Tatz offer a refreshing look at suicide, away from the biomedical models that are so prevalent. This is a critical, stimulating, and moral tale of suicide that provides a new look, one that is sorely needed. It is a significant accomplishment in the new field of critical suicide studies.” (Michael J. Kral, PhD, School of Social Work, Wayne State University, Michigan, USA)

“Every once in a while, along comes a book that pleasantly enlightens its readers. This is one such book. It is a major breakthrough and a step in the right direction in addressing the problem of suicide, and maybe one day effective prevention as well as interventional strategies will replace the current zombie policies. This book intelligently stimulates public discussion. and presents suicide from different viewpoints without any prejudice or preconceived ideas. [W]e need to understand suicide. I totally endorse the authors for exploring suicide on its own merit and outside of its current mental illness/depression frame. The authors raise many important issues relevant to understanding and preventing suicide, which makes it an important resource for policy makers, researchers, educators, and the public.” (Said Shahtahmasebi, PhD, Research Director, the Good Life Research Centre Trust, Christchurch, New Zealand, Professor, Community Faculty, Division of Adolescent Medicine, University of Kentucky, USA)

“… the complex relationships between suicidal behavior, mental illness and other social, economic, personal, philosophical and cultural factors have long been the subject of intense debate. There are no ‘silver bullets’ to prevent or ‘vaccines’ against suicidal behavior. [T]his new contribution deserves to be read, contested and considered thoughtfully. Current attempts to minimize death by suicide do reflect the aspirations of a more compassionate and connected community. This work highlights the need to approach that aspiration deeply and not be beguiled by superficial media campaigns, episodic awareness drives or over-medicalization of the task. Active engagement of the wider community in this discourse is an essential component of an enlightened national approach. Let’s hope our national leaders, and those organizations and professionals, who actively promote suicide prevention are willing to engage with this necessary discourse.” (Ian Hickie, PhD, Co-Director, Health and Policy at the University of Sydney's Brain and Mind Centre)

“As suicide rates still rise despite intensive suicide prevention funding, this learned, engaging and often provocative treatise challenges received wisdom about this taboo topic. Its authors, who have decades of collective experience in suicide and are eloquent about its social face, invite holistic and interdisciplinary responses and re-examination of the science of suicide. This work warrants an important place in critical suicide studies. (Michael Dudley, Child and Adolescent Psychiatry, University of New South Wales, Sydney)

“The Sealed Box of Suicide critically interrogates the many ways suicide is currently framed and responded to. Dominant contemporary approaches to understanding and preventing suicide are considered in detail, and the consequences and limitations of the medicalisation of suicide are spelled out with admirable clarity. The book aims to move beyond the constrictions imposed on thought and practice by such individualising and psychologising approaches, and instead considers suicide from much broader moral, philosophical and social-contextual perspectives. The book is a refreshingly critical, engaging and thought-provoking examination of a complex subject, one that pushes back at reductive, simplistic and narrow-minded ways of constructing the issue. It is an important and timely contribution to the literature, and one that opens up new directions and possibilities for both theory and practice.” (Ian Marsh, School of Allied and Public Health Professions, University of Christ Church, Canterbury, UK)

“This is a timely and important book. Some will no doubt find it provocative. By calling it The Sealed Box of Suicide, the authors point to the fact that, in mainstream suicidology, the topic of suicide is confined to the box of the biomedical model, where suicide is completely decontextualized and linked to mental illness. Eloquently, and at times sharply, the authors question this model as well as a number of other well-established “truths.” They creatively propose alternative ways to understand, research, and prevent suicide. … it is high time to question and critically discuss many aspects of suicide and suicide prevention that for too long have been taken for granted. It is my sincere hope that this book will not only be widely read, but will stimulate vivid discussions around the globe.” (Heidi Hjelmeland, PhD, Department of Mental Health, Norwegian University of Science and Technology, Trondheim, Norway)

“In a style accessible to academics, professionals, and those who have been bereaved, this remarkable—and likely controversial—book refuses to see suicide as a singular ontological phenomenon across socio-cultural and historical contexts. Exploring the implications of this proposition both intellectually and practically, the authors courageously seek to open much needed conversations on the topic.” (Ludek Broz, PhD, Institute of Ethnology of the Czech Academy of Sciences, co-editor of Suicide and Agency (Routledge: 2016))

“The Sealed Box of Suicide is a most welcome interruption into the business as usual approach to understanding suicide which is predicated on a singular reading of suicide that is tightly tethered to individual psychopathology. In a highly readable text, Tatz and Tatz introduce readers to a much more nuanced, contextually situated, and historically informed understanding of suicide’s multiplicity and historical instability. This broader, more complicated view, provides a more reasonable platform from which to launch a set of ethically grounded, socially situated, and compassionate responses. The taken-for-granted suicide prevention imperative to stop all suicides – at any cost- is rightly questioned, and a range of critical, creative and culturally informed alternatives for understanding and responding to suicide are proposed.­” (­Jennifer White, PhD, School of Youth and Child Care, University of Victoria, British Columbia, Canada)